There are situations that force you to write. Containment is one of them. Thousands of pens, immobile, hesitant or cautious, are suddenly swept away in the flood of overinformation and set free. Mine remains hesitant. The first thing is not to weight this down. But I’ve read somewhere that the only way to deal with a drama, a crisis, or a painful event, remains writing. But the noise is all round. Always this damn information - alerts, sounds, messages - that break the unprecedented silence of the neighborhood and the city. Unceasing flows that spread forecasts, expectations, extrapolations, rumours and fake news. Poems and jokes too, with more or less taste (or is it me for whom it is difficult to react or maybe I am just not ready for it).

And then this impossibility of going to see for oneself, going out to testify that the reality of one is not the reality of others. In other words, borrowed from the Indian politician Kapil Sibal: "Two India(s). One (at home) doing yoga, watching the Ramayana, playing Antakshari[1]. The other (trying to reach home). Fighting to survive without food, shelter, support"[2].

Image. Out of the field of images, this second India is seen during ephemeral expeditions into the streets in which those without a roof over their heads wander, at the risk of running into law enforcement officials who seem not to understand the real matter:  life. Few people make their way to the few shops that are open. Hesitant and changing orders from the government decide their movements. Open in the evening, hearts up, masks up! Open in the morning only? Let's wash our hands before entering. Make a line please. Get yourself into the hole (painted on the floor). It will protect each other enough. The noise of the gates opening and closing shows respects for these temporal injunctions, unless one tries to deviate from them. Privilege of one who dares to engage in the usual transactions with the authorities. At nightfall, the streets look as on a summer afternoon. Empty. Silent. Are you sleeping?

Sound. I remember the musicality of the cities of North India. Songs, mantras (chants), melodies of devotional, classical and popular, bhajan (devotional songs), ghazals (form of amatory poem or ode, originating in Arabic poetry), Bollywood songs. Do they still fill the air of these cities? Here in South India, none of those vibrations which could help us remember that there is someone, somewhere near, who is singing, playing, listening….living. Gone are the muezzins who give rhythm to the days and nights with their voices whose sound cross the neighborhood as if to call out to each other; no more the bells … the churches are closed. Crows and butterflies, a few colourful birds. A cat, hungry and with a broken ear arrives at dusk, discreetly; the noiseless cat discreetly plays tricks to snoop in the remains. No noise, except the morning sound of the car and two-wheelers engines parked in the street, which helps reminding that they need to be ready for departure. Private drivers carefully explore their sounds, train them as if they were horses who need to be pampered. 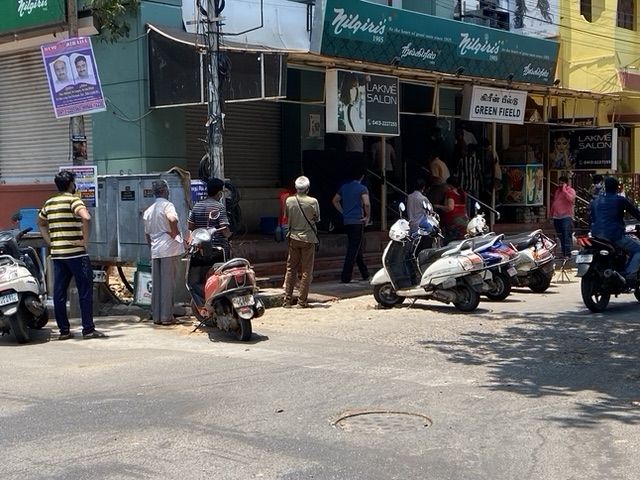 Movement, however. Those drivers, called by their employers to keep the home afloat: gasoline and oil for the engines; dry provisions for the kitchens. Fresh veggies ? No, they don't touch that. Please. That's the role of the cooks. They, too, are invited to pass the door, to get inside, but only after changing their clothes and washing their hands. Taking the risk of having someone at home, having them risk going out to cook, clean or empty the garbage requires caution, however little. Viral threat or not, no question of dispensing with this service. The risk is (t)here. The compromise too: times have changed, those who were not supposed to defile the home in any way have entered it. The risk has been taken for a long time. Today we have to measure it. Maybe it was time. They are the ones who are walking, who are playing the virus game. The threat is (t)here, as we said. To ward off this spell, tomorrow, April 5, the lights will be turned off for nine minutes at 9 p.m. and lamps will be turned on, in a harmonious movement to follow the fight against the virus and its defilements. He asked for it. They will.

People. But she's here. Close. Too close. Priya comes in the morning. She stops her scooter in front of the gate. She climbs up the stairs, her shopping basket full of fresh veggies from the market. No big or exotic species but local food, from there … near the old bus stand. Veggies under the sun? What a strange thing! She sweeps, cleans, as every day, but not at the same hours. It is compulsory to free the balcony before they come: the landlords, man and woman together, who enjoy the shade and the coolness of the mornings. Phones on, almost no conversations. Comments. Being there on the outside to comment on what is confined, and what remains. In the evening, they warm their hands before clapping and singing too. As Modi said, we have to ward off the virus. Light "in all four directions" to "defy the darkness of the coronavirus and show the strength of 1.3 billion Indians". So is the solution to this evil in the hands of the people?

But in the meanwhile, following the feelings of hate, too many people claim : "We are the people, not them, not those who gathered for the Ijtema at Nizamuddin, then spreading disease throughout the country. They are responsible, first and foremost, for this communal disharmony".

The people. Women from Swachh Bharat.

The people. In the streets.

The people. Off the streets.

The people. Out to the sea.

The people. Walk. Walk to get back (home).

The people. Too close to me.

The people. Missing them.

The people. Too close to me…really ? 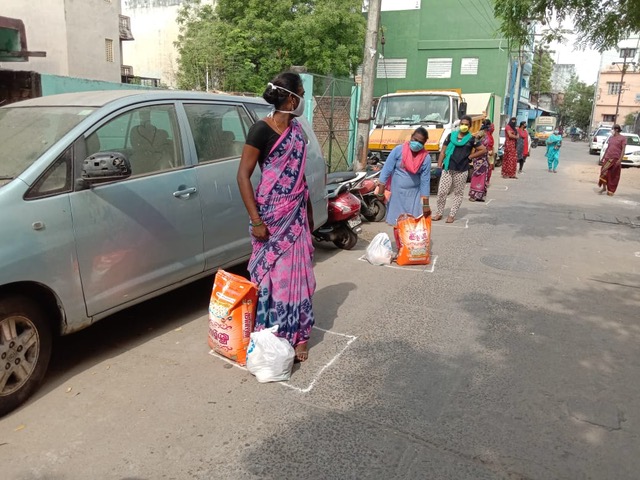 Food distribution to the hijras (transgender), another group that's sturggling to meet their food requirements

Nicolas Bautès, French Institute of Pondicherry, can be reached at n.bautes@gmail.com

[1] An Indian board game in which each player sings the first verse of a song that begins with the Hindi consonant on which the previous player's selection of songs ended.

[2] “Two India’s. One (at home) doing yoga, watching Ramayana, playing Antakshari. The other (trying to reach home). Fighting for survival without food, without shelter, without support,” Source. The Hindu, 03 April 2020.