Mrs. Wilkins Teaching An Igorot Boy the Cakewalk at the 1904 World's Fair 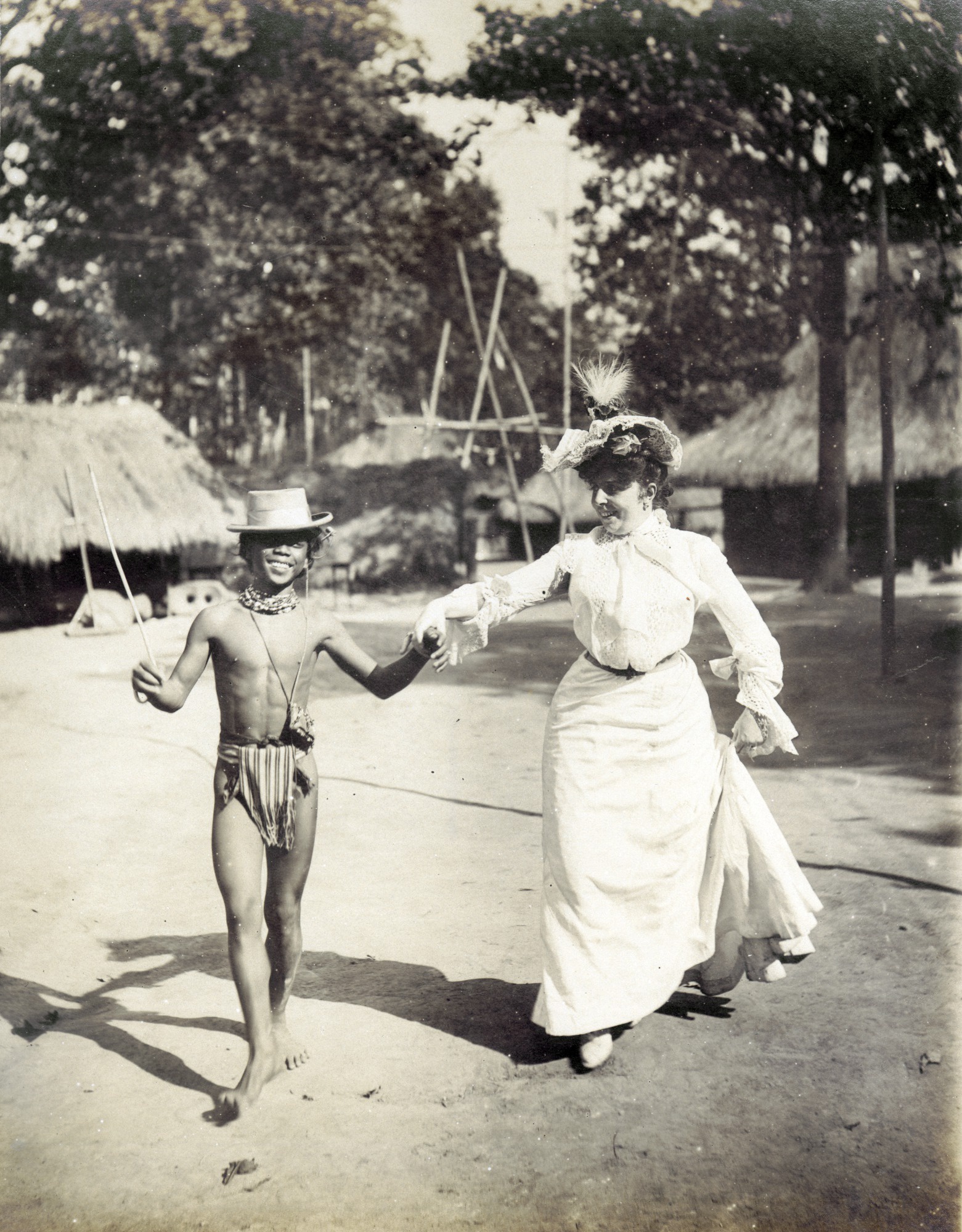 Attached here is an archival photograph from the Missouri Historical Society of the 1904 St. Louis World’s Fair, specifically of indigenous Filipinos from the Cordillera region of northern Luzon known as the Igorots. Titled by American photographer Jessie Tarbox Beals (1870-1942) as “Mrs. Wilkins teaching an Igorrote boy the cakewalk at the 1904 World’s Fair,” the photographs presents two people in the image, the eponymous young Igorot boy dancing with Vienna opera singer Mrs. George S. Wilkins, as she teaches him the cakewalk, a popular dance of the time period. The young Igorot boy (who is not named by Beals), is wearing a bahag (loincloth), as well as a Western hat and cane, hand in hand with Mrs. Wilkins, who is wearing a white dress with the Igorot village of the Philippine Exhibition in the background.

During my research on the 1904 World's Fair and the Philippine Exhibition, I came across James Gilbert, who in his 2009 book Whose Fair?: Experience, Memory, and the History of the Great St. Louis Exposition, discusses the relationship that the Igorot boy has with both Mrs. Wilkins and Beals in the photograph. He argues that the interaction between Wilkins, Beals, and the Igorot boy can be seen as a glimpse into cross-cultural interaction with ‘native’ peoples through pop culture, molding and shaping the unknown & exotic into something more palatable. Wilkins acts as a representation of the American citizen (being married to an American professor), as she interacts with the 'savage' and unknown Igorots in Beals' photograph, adding a level of familiarity to the spectacle. This act in it of itself would contradict the official aim of the exhibition & its anthropologists, which was to present the Igorots and other indigenous peoples in their supposed native environment. He brings up the dissonance between the perspectives of the American public and the American anthropologists organizing the exhibition. Gilbert then further adds to this by using the boy as a stand-in for other marginalized cultures in America at the time, notably African-Americans, who are conspicuous in their absence in many of the photographed interactions with the Igorots. He brings up them in particular due to the history of the cakewalk dance as whole, coming from plantation owners co-opting the dance from black slaves. But while Gilbert raises an excellent point in bringing up the lack of African-Americans in photographs and how interactions like this could be perceived as a challenge of American society and their views on marginalized communities, I find that it still puts the focus on Wilkins as the subject, rather than the other participant involved in this pop culture interaction.

Because of this, I wish to add another perspective in the analysis of this brief performance. What was his name? How did the boy feel about this dance?  He seems to be enjoying himself, so what did he think about it compared to the numerous Ballangbang performances he’s done for fairgoers? As a cultural dance, the Ballangbang is often done in celebration, with the men playing gongs while the women usually perform the actual dancing. With the cakewalk also being performed in celebrations, did he find similarities to the movement or was it entirely alien to him, being in a more intimate performance with just one other person? Did he know about the history of the dance, or if so, would he feel different about performing it? And with how comfortable they look with each other, would he have taught her how to do Igorot dances as well?

Sometime between April to December 1904

Reference:
Whose Fair? Experience, Memory, and the History of the Great St. Louis Exposition by James Gilbert (University of Chicago Press, 2009)

Readjusting the focus: Who was the other participant involved in the cakewalk dance?

Igorot means "people of the mountains" in Tagalog, has been phased out over time due to its derogatory connotations in favor of the names of the various ethnolinguistic groups in the region or the umbrella terms of the ‘Cordilleran peoples’ or Ifugao/Ipugaw (also meaning mountain people in Tagalog)

Bahag refers to the loincloth that male Igorot people wear

Ballangbang refers to one of many indigenous Igorot dances, with different variations across the Cordillera Autonomous Region in the Philippines, and is often done with many participants during social gatherings

Cakewalk as term has unclear origins, though one of the widely-accepted theories is that it is a reference to an American South tradition where black slaves would be awarded a cake for having the fanciest procession walk, while another was that it was created to make fun of plantation owners' prizewalk dances