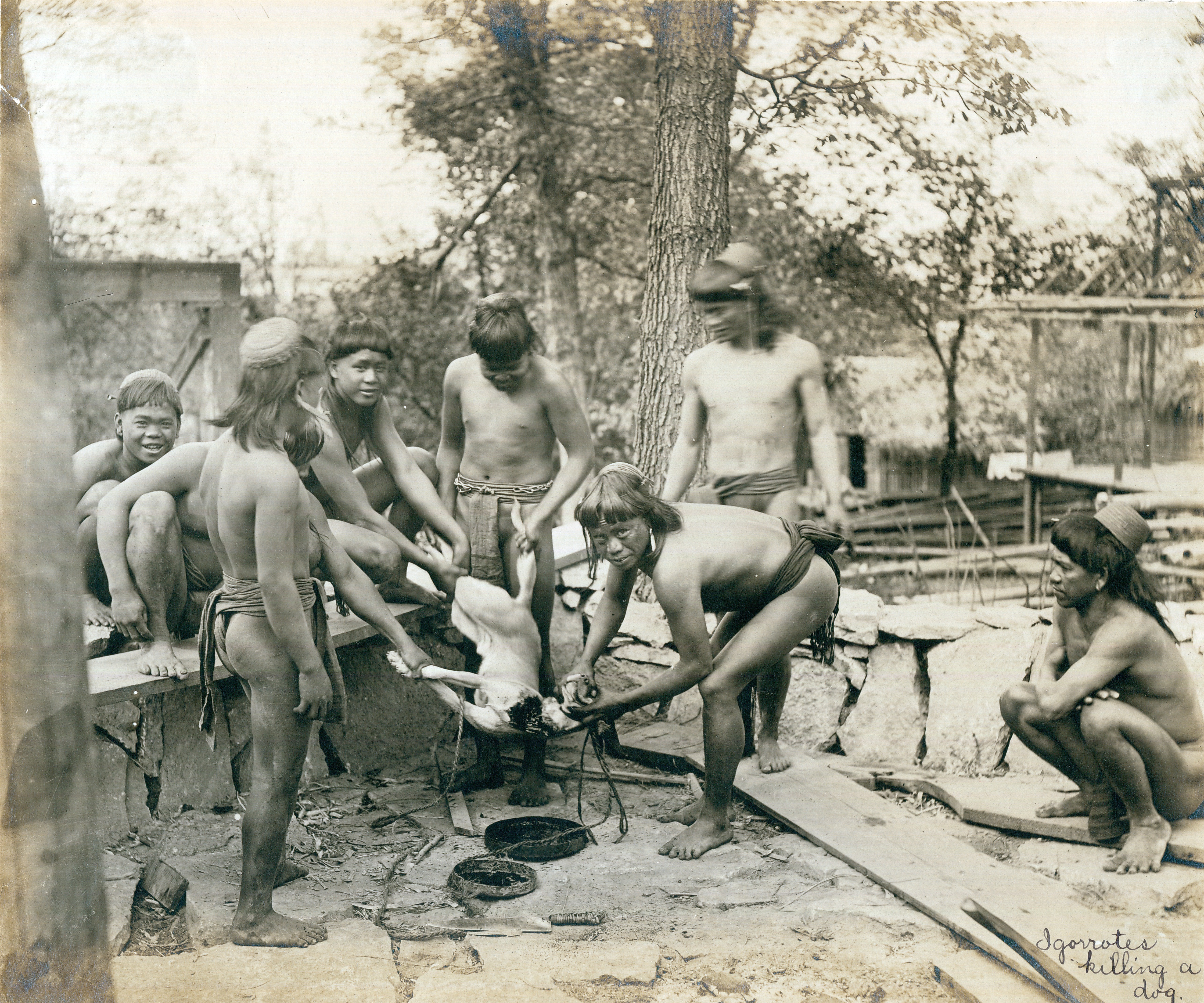 In 1904, the United States introduced Filipino culture to the American public with their Philippine Exposition at the St. Louis World’s Fair, a faux recreation of indigenous Filipino villages located at the outskirts of the exhibition fairgrounds and populated with various indigenous Filipino tribes from across its various islands, the most well-known being of the Ifugao people of northern Luzon, referred to at the time as Igorots (Taft, 1904, 29-30).

While framed as a showcase of other cultures in their supposed “native” environment, people like the Igorots were often required by the exhibition committee to repeatedly perform various cultural dances and ceremonial practices during the day, with particular tasks that were foreign to the average American being especially emphasized. One particular communal practice that would come to define the Igorots in the eyes of the public was the act of dog-eating.

The photograph here portrays 7 Igorot tribesmen in one of these Philippine Exposition villages, as they go through the ceremonial killing of a dog for ritual consumption. Three of the tribesmen hold down the dog, while one uses a knife to slit the dog's throat to drain its blood on the container below its head. Meanwhile, the remaining three tribesmen look on, with a few looking directly into the camera of American photographer Jessie Tarbox Beals with amused expressions.

Photographs of these rituals would often be taken and spread around the public, with the Igorots receiving a variety of demeaning names in the media such as “savage” and “dog-eater.” Narratives that promoted these nicknames and ideas were perpetuated by the American government, who used these photographs to justify a continued American presence in the archipelago on the basis of savagery (Fermin, 2004, 39). Though most remember the technological leaps forward that debuted during the fair, photographs like these of the Philippine Exposition are rarely discussed in the fair’s legacy, obscuring the identity of these people under the veil of savagery. And with that, maybe an adjustment of focus is in order, to understand the meaning behind these rituals for the people doing them, rather than the ones observing.

Sometime between April to December 1904

Taft, W. H. (2005). Circular letter of Governor Taft and information and instructions for the preparation of the Philippine exhibit for the Louisiana Purchase Exposition to be held at St. Louis, Mo., U.S.A., 1904: A preliminary exposition to be held in Manila in 1903 and a permanent museum of Philippine products in the capital of the archipelago. http://name.umdl.umich.edu/aqw2847.0001.001

Igorot means "people of the mountains" in Tagalog, has been phased out over time due to its derogatory connotations in favor of the names of the various ethnolinguistic groups in the region or the umbrella term of the ‘Cordilleran peoples’