I have been teaching history at the School of Liberal Studies, Ambedkar University Delhi (AUD), since 2011. Prior to joining AUD I was working as researcher for the Japanese newspaper, Yomiuri Shimbun, at its India bureau office in New Delhi, and at the same time working to complete my PhD on the history of Ainu education in Japan. I received my PhD from the Department of East Asian Studies, University of Delhi, in 2009. I was fortunate to get the Hosei International Fund Fellowship (Open), Tokyo, for my PhD research, which allowed me to spend a very fruitful year in Japan.

Before this, I had done an advanced diploma course in Travel and Tourism and worked for two years in the travel industry after my MA in History from the University of Delhi. This was the time when India was opening up economically in the mid-1990s and many Japanese companies were coming in to invest. These Japanese companies were looking for interpreters and translators, and with a mind to fill one of these openings I decided to learn Japanese but ended up taking admission in the MPhil course on Japanese Studies as well as a diploma course in Japanese language in the Department of Chinese and Japanese Studies of the University of Delhi. I received the Japan Foundation Language Training Fellowship for Post Graduates to learn the language at its Kansai Centre while doing my MPhil. My first academic job after completing MPhil was with the Institute of Chinese Studies, CSDS, Delhi, where I began to see academics as a career and enrolled for a PhD in Japanese Studies.

Though born and brought up in Assam, I have been living in Delhi since 1985. I left Assam at a time when the state was beginning to burn with ethnic conflict/s and the future looked dark for most, and my coming to Delhi that time seemed almost like fleeing from the fear of that darkness. But I kept going back to my hometown, and that was how I happened to produce a documentary film for Doordarshan called Future At A Stake (1998) to record the breakdown of education system in the North East of India due to militancy, a very sensitive subject at that time.

This interest to work on the northeast gained new direction since joining AUD and together with other colleagues from the region we founded the North East Forum (NEF) at AUD, as part of the Centre for Community Knowledge (CCK). As the Founding Convenor of NEF, my first project was on material culture of the northeast, which resulted in a research publication titled Objects: Identities: Meanings: Insider Perspectives from North East India (2016), edited by me along with Surajit Sarkar. My research paper in this volume is on Bodo (Anglicised for Boro) weaving tradition, titled ‘Weaving Material Culture: An act of identity construction’. My forthcoming book article is on the materiality of Boro food culture and is titled The Boro Material Culture of Food: Social and Cultural Meanings. The other research work that I am currently working on looks at Boro spirituality and religion, Bathou, in everyday life and in articulating the Boro notion of nationhood.

Another very important area of work, which I have been interested in for a long time, is on rice culture in the northeast, which is now being explored under the Humanities across Borders programme of IIAS.

Ag lainai: The Ritual of Cutting the First Fruits of Paddy
6 April 2019
Image

The story of Bodo stole and Kannagi protests
16 January 2020

Towards a 'Rice-scapes' Syllabus: Notes on the Asian Rice-Scapes Panel at the Borderland Spaces Conference, Bishkek
10 October 2018 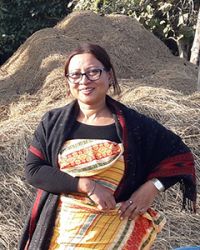