Survey on street food in Dakar and its suburbs: New places and new eating habits

From July 5 to 7, 2019, Jeanne Thérèse Fatou Diouf and Assane Kébé, Street Food Project volunteers, conducted a survey on street food in Dakar. Jeanne visited the city centre of Dakar and its surroundings (Sahm, Colobane, Niary Talli etc). For Assane Kébé, the suburbs of Dakar (Thiaroye and Pikine) were his home ground.

From July 5 to 7, 2019, Jeanne Thérèse Fatou Diouf and Assane Kébé, Street Food Project volunteers, conducted a survey on street food in Dakar. Jeanne visited the city centre of Dakar and its surroundings (Sahm, Colobane, Niary Talli etc). For Assane Kébé, the suburbs of Dakar (Thiaroye and Pikine) were his home ground.

An inventory of the situation....

They were immediately struck by the impressive number of shops along the busiest roads, which gave the impression that the whole city had turned into a huge market. At first glance, the content of these shops does not attract much attention, but when you look closely, you can see that there is not much differentiation between the products offered for sale. On every street corner, too, various food outlets compete for the decor with other types of businesses. These places are either "canteens" or garages of houses transformed into catering spaces with a large table and wooden benches around for customers, or metal or wooden kiosks glued to a wall or by the roadside. However, the majority of the places visited are very rudimentary facilities:

Some have simple tables set out in the open, others stay in the sun while others, like breakfast sellers, join sheets together to make a sort of voting booth in a corner of the street. 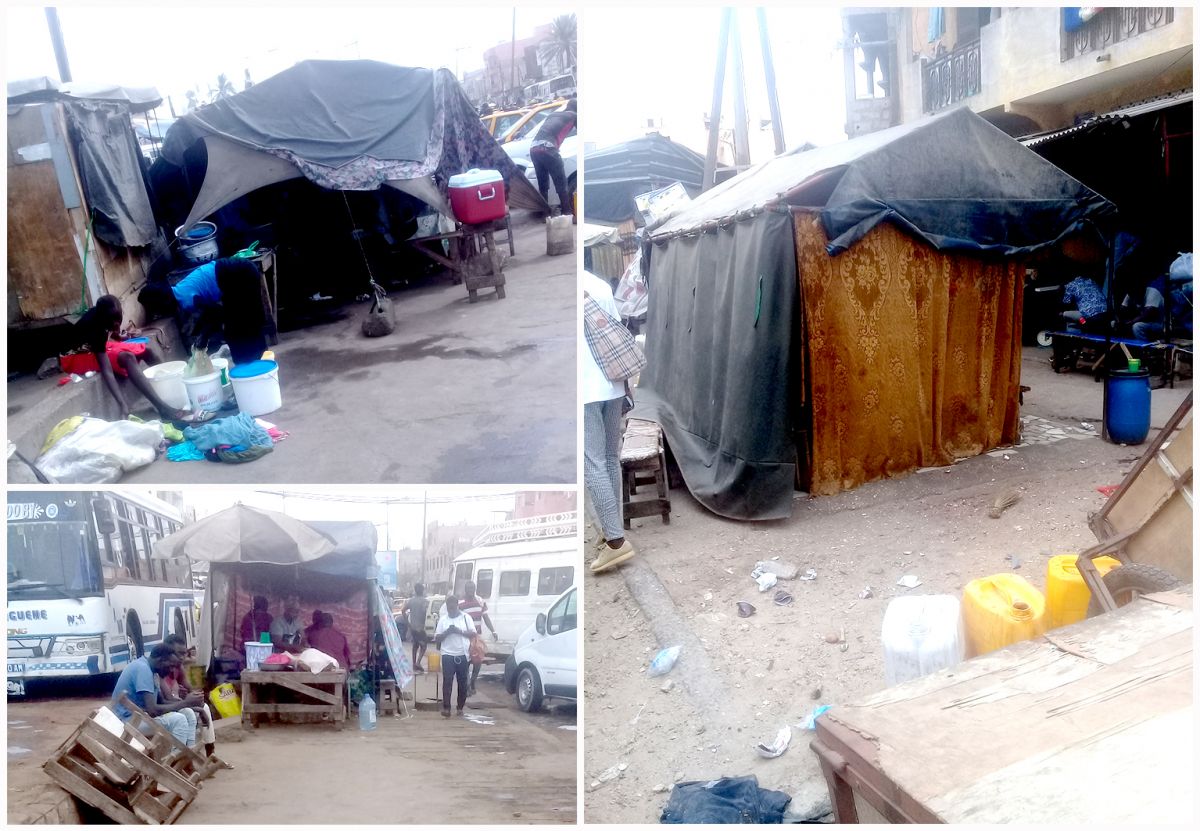 The materials used are numerous: stainless steel or plastic or glass containers, spoons, dishes, a gas bottle or coal furnace, plastic basins for laundry, a few 20-litre oil cans recycled into water reserves and a stack of newspaper used as packaging. In the middle of the day, it is also common to find a salesman immediately next door who offers, after the meal, local sweet and fresh juices or coffee and tea. Hygiene is most of the time questionable but this does not seem to bother customers who chat loudly and show great familiarity with the seller. These squares, which can be found in all the city's major arteries (markets, bus stations, bus or taxi terminals, in front of schools, hospitals or large companies), are sometimes cleared by municipalities that are struggling to cope with the congestion of sidewalks.

Depending on the location and type of food considered, there are several types of vendors, of both sexes and of all ages. In markets, for example, lunch is usually prepared by women from other parts of the country who have moved to the capital to devote themselves to the restaurant business. While in the neighbourhoods, breakfast vendors are generally local residents who set up a corner near their home where they offer their food to neighbours and passers-by. There are also a large number of migrants from the sub-region (Hausa of Niger, Fulani of Guinea, Moors) who generally sell meat prepared in a way that makes them special or maintain a catering system specialized in serving breakfast and dinner: tangana. The clientele is just as diverse: bus and taxi drivers, market workers and nearby construction sites, students and pupils, but also families who buy meals here.

Our volunteers were very surprised by the growing trend among Senegalese people to eat outdoors. Until recently, this practice was not widespread for cultural reasons. 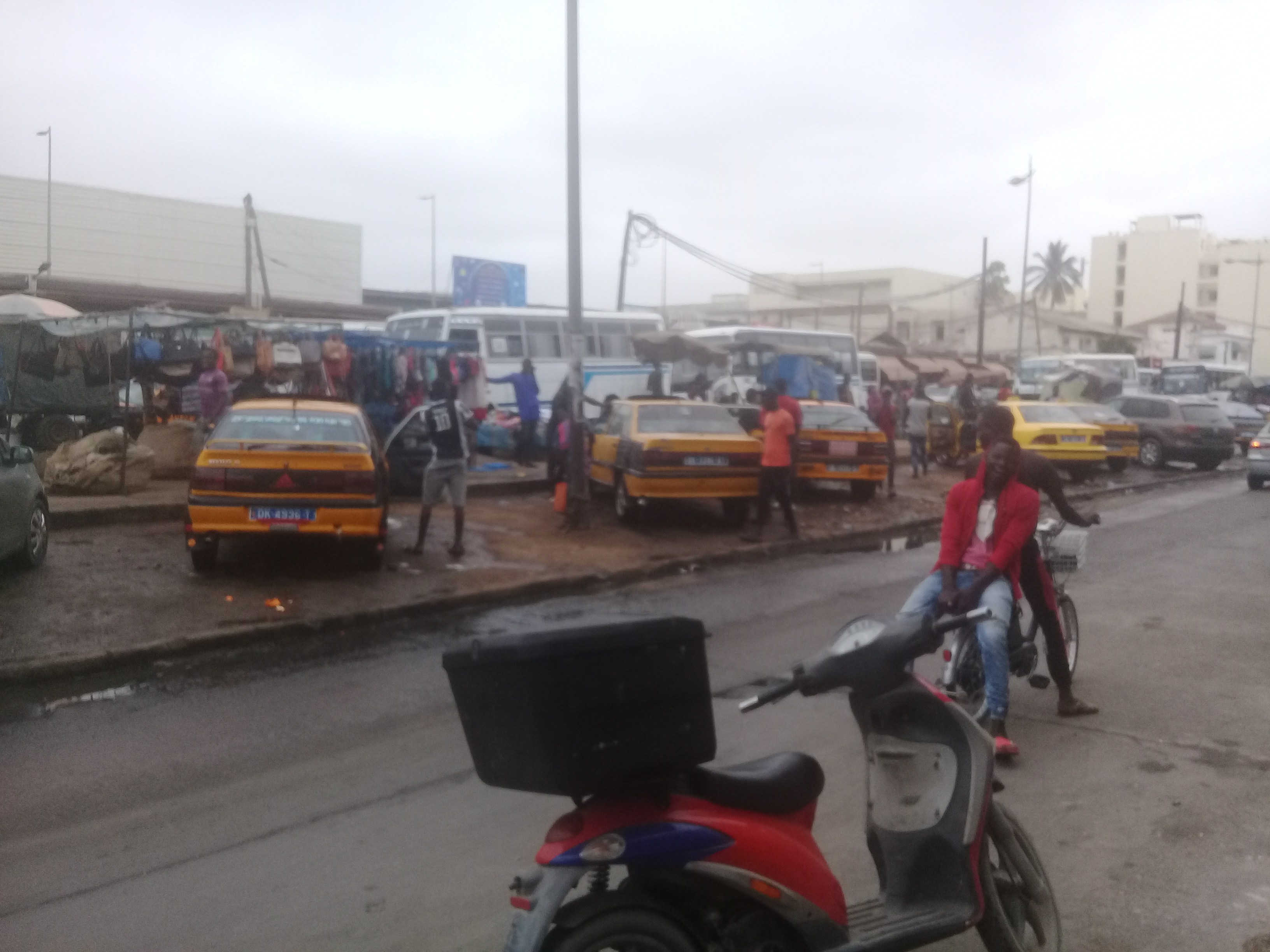 Menus according to time and clientele

Depending on the time of day, meals with varied menus are served to this very diverse clientele. For breakfast, for example, the saleswomen have bowls on a table, each containing a sauce to make a sandwich, at the customer's discretion, on site or to take away, wrapped in newspaper: 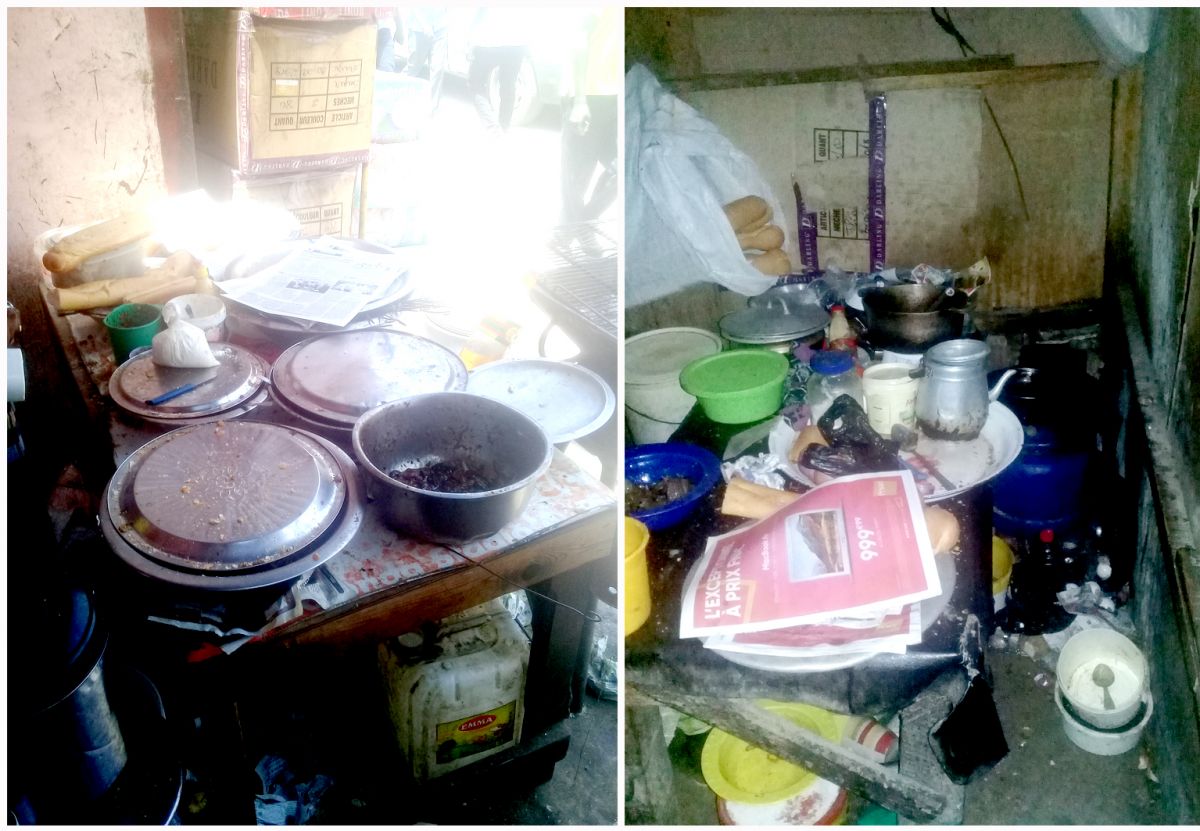 At lunchtime, dishes mainly made from rice are offered to customers: it is mainly fish rice "ceebu jën" that is prepared. However, the majority offer one or more other dishes called "ñaari cinn" at the same time:

It is always necessary to diversify in the preparation. Arame and Khady confirm this reality. The first one tells us that there are "as many customers as there are tastes". You have to prepare as much as possible to have a good chance of selling well. Most of his work is focused on the different types of sauces. It is the same with Khady, apart from fish rice, she prepares "mafé", "supp-kànja", "mboroxe", "yaasa", "cuu", "domoda", all Senegal dishes, according to her.

Around 5 pm, small tables or kiosks more frequent near the living areas are set up and offer "fataya sandwich", "accra sandwich", "bread-thon" and at 7pm, millet porridge (laax, melts) and millet couscous (ceere, caagiri) but also food from the sub-region (atiéké) are set up in the main streets.

In the evening, there are many sellers of chicken, liver or grilled meat sandwiches. There are also vendors of boiled meat of Moorish origin called "forox-caaya" who walk around all day with a small cart with a stove or simmer pieces of cooked meat.

As far as breakfast is concerned, most sellers prepare at home and only heat up (or not) before serving to customers. However, in some places where the preparation of food in the presence of the customer (omelettes, French fries, roasted meat, fried potatoes) is part of the concept (tangana), the preparation must be done on site. For lunch, too, the preparation is done on site in large pots arranged in, around or in front of the restaurant. 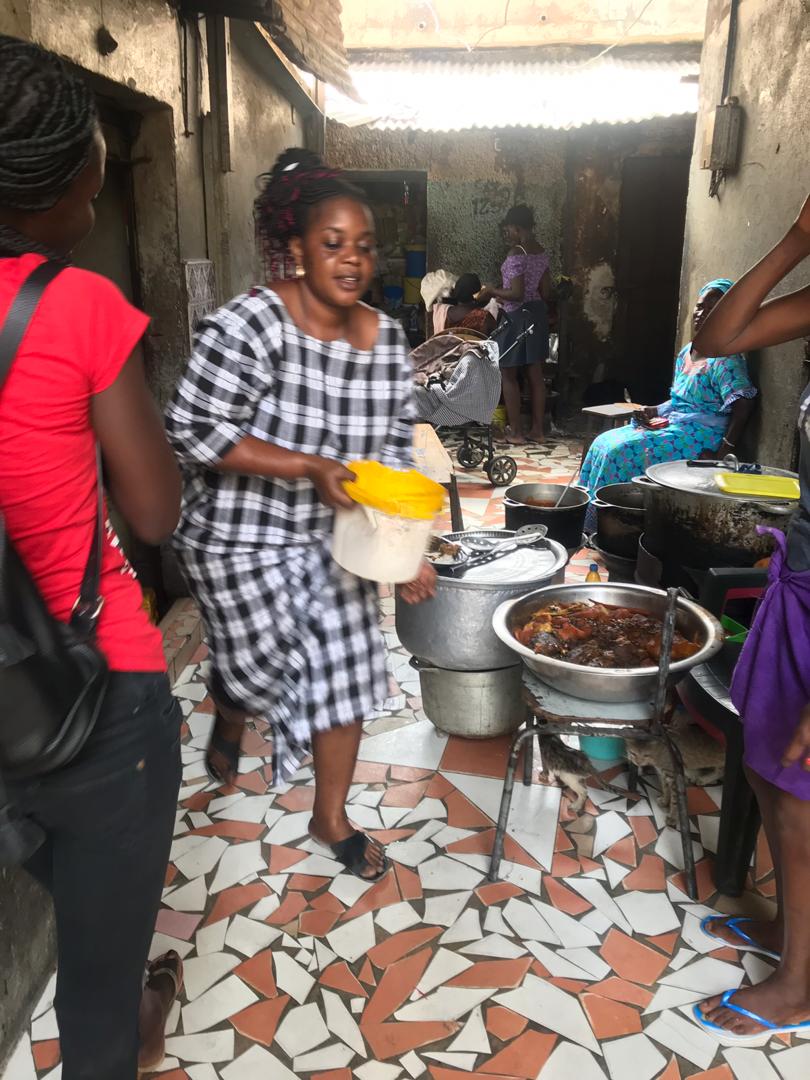 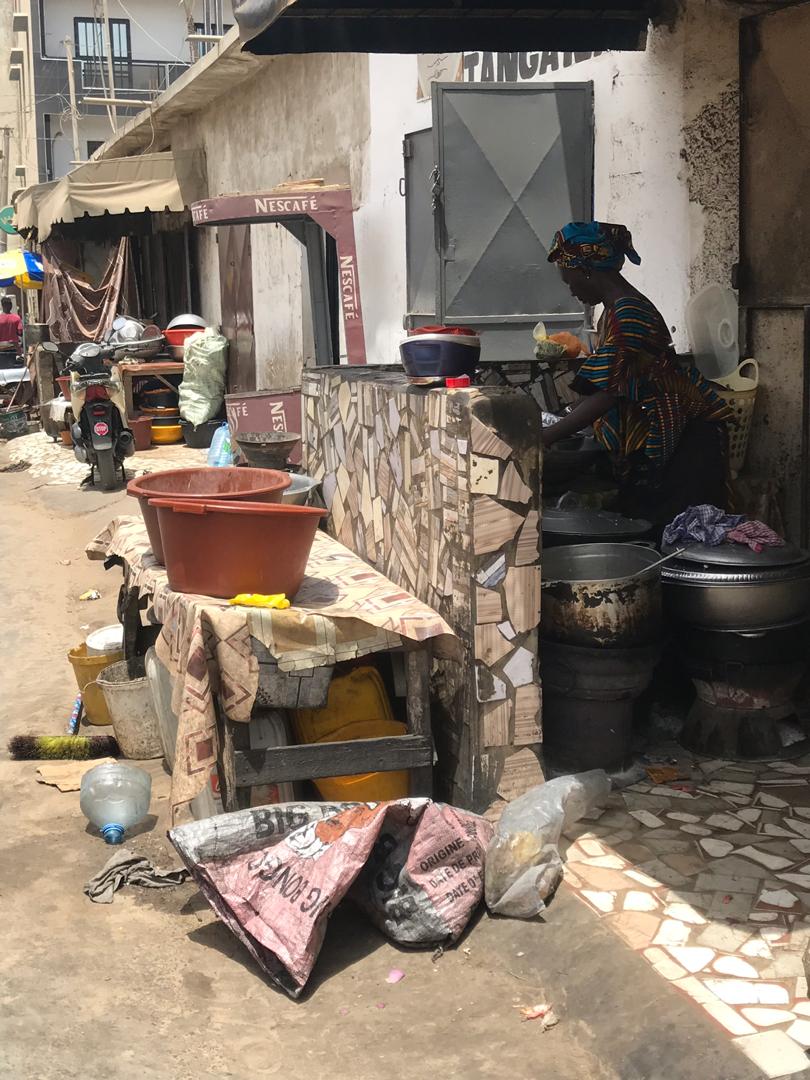 For others, the entire preparation chain is a very serious matter, and therefore personal, especially for reasons related to Muslim (halal) precepts:

Abdallah tells us that he is a Muslim and that he cannot consume or sell directly what comes from Europe because he does not know "how we did to slit it". According to him, happiness must be sought in the afterlife in every profession that one performs, so if the work is not well done, one cannot access salvation. We lose twice: we get tired of looking for money here and tomorrow before God, it will be a difficult report. Africans cannot risk, according to him, after the difficult conditions of life on earth, losing salvation in the afterlife. That's why he doesn't give in to the facility. According to him, the meat should be labelled "halal" to at least reassure the consumer.

The issue of hygiene in the preparation was also discussed, the sellers say they are in good standing with the State services in charge of hygiene control and say they have all their documents in order. They also argue that customers are generally very demanding on hygiene issues. However, our volunteers are wondering about the perception that Senegalese people have of hygiene. 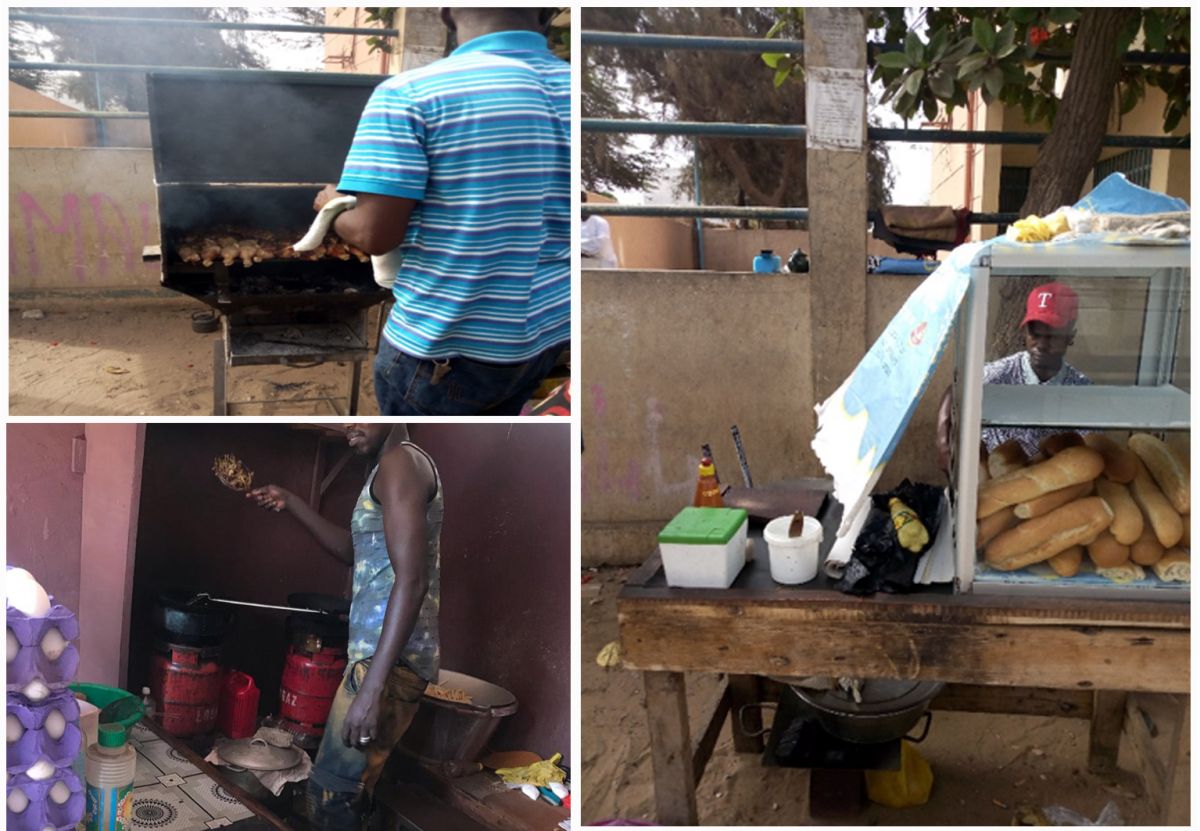