From what began as a literary interest in fiction and novels that came from the troubled country of India’s northeast long embroiled in separatist insurgencies and uprisings, I suddenly found myself curious about the real-life testimonies from the ground that could be the basis of these narratives. Some of my initial work while I taught literature at Cotton College in Assam, now Cotton University, got published on these themes but the stories and writings of  former rebels that made a striking cultural representation of the region’s contemporary history led me to wonder why women did not write about their experiences.  In the eighties and nineties, several young women, mostly college and high school dropouts from Upper Assam’s rural and semi rural districts had got sucked into a movement that framed the climate of protest and rebellion largely prevalent in the northeast. However many questions remained unanswered: why did young people here not identify themselves with the common Indian citizen? What was different about this border region from the rest of the country? What did the militarised lives of people do to notions of rights and freedom and the politics of choice? What did they do to women’s lives? And how did the oral and written literatures mirror these? Or did they not?

My post-doctoral research while I was a fellow at the Nehru Memorial Museum and Library in New Delhi on postcolonial tendencies of the time easily accommodated gender concerns, a publication that is forthcoming ( Arms and the Woman: The Politics of Gender and Insurgency in NE India) but most academics were not keen to probe or study what had happened to them in the ensuing conflicts that our region was  mired  in. As a woman of the region used to a comfortable life, the privileges of a good education and a cosmopolitan orientation my encounters with less-advantaged women who fled the safety of family and  struggled in rough terrains across perilous international borders was a difficult moment of discovery, in more ways than one. Thus began a self-reflexive journey into the everyday lives of people who had been pushed to the edge, of men and particularly women who sometimes disappeared or adopted different identities in order to fling themselves into rebel groups and outfits that had made claims about freedom and autonomy, a preoccupation with many societies in this South Asian region . When the Mellon initiative at IIAS invited me to join its Humanities across Borders ( HaB) program this seemed a great way of relooking the connections and conversations that peoples across regions could have. Classroom teaching suddenly seemed to find new spaces that brought down walls and crossed boundaries. I am encouraged  by the  liberating prospects that this program promises to hinge its objectives upon and I know that the four years of research and engaged understanding will be greatly and mutually rewarding to  the program and its people .

My own projects on women’s social and political mobilisations in Nagaland and Assam, under the South Asia platform, seem to have exciting possibilities about how gendered lives,  and power and dissent thereof, across South Asia and South East Asia could chart similar histories of empowerment and mobility.  I look forward towards finding a typology of women’s experiences in Asia and Africa and of shared histories of survival that can become the subject of  writing a new cultural history in gender studies across borders. This program I imagine will allow much exchange of ideas and knowledge, both pedagogic and humanistic, something that the IIAS-hosted Chiang Mai convention in July this year seeks to explore. Between working towards these goals I am also writing a brief history of Cotton College, the 117-year old institution, my alma mater and where I also work in, which is witness to and participant of the changing politics and culture  of India’s northeast in these turbulent times.

Glimpses of Day 2 of the Guwahati Workshop
4 April 2018

Guwahati Workshop: Mapping Who We Are
3 April 2018

Guwahati Workshop: Storyboard exercise on 'I dare to think, I dare to imagine'
5 April 2018

India's Northeast: Where Women Make Up Another Tribe
22 August 2018 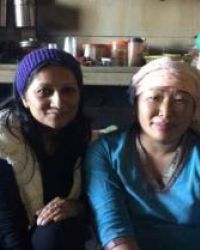