The traditional self-governance of the Nagas of Nagaland is reflective of the customary practices of the Nagas.

All the 16 major tribes of Nagaland differ slightly in the way they run the administration of their villages and governance of the tribe. Among the Konyak Nagas for example, there was the concept of the ‘Angh’ or the most powerful chief, the descendants of whom carry the surname of Angh even today- then there are the ‘commoners’ or those who do not trace their lineage to the Anghs. The Sumi Nagas on the other hand have a hereditary chieftainship, where the chief’s words were considered law. Today, it has solidified and such chiefs take the name of ‘Gaonburas’ and among the Sumis, the title is still hereditary; passing on from father to  son, even though in the general parlance, Gaonburas do not follow he system of passing of title from one generation to  the next within the same family. The Ao Nagas follow an almost republican nature of governance, where the citizens of the village play an active role in the affairs of governance, with the village administration not run by a chief or a hereditary ruler, but by a council of elders, who are usually men, representing each clan and family groups of that particular village. There is then, the Angami Nagas where consensus of the people is the norm. Each Naga village is an individual entity, owning and governing their own resources, maintaining law and order, delivering justice and securing the defense of the village. 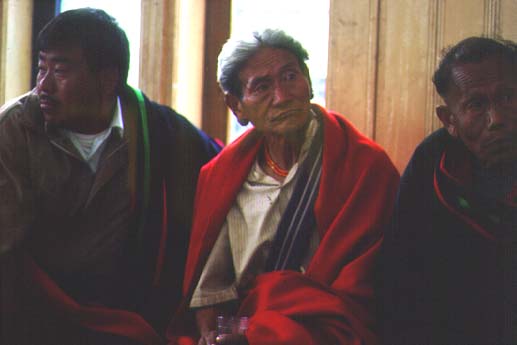 Understanding the social fabric of the Naga society is important for understanding the local self- governance institutions of Nagaland. For the Nagas, loyalty to and honor of the family and the clan and the village where the clan comes from is placed on the highest pedestal. It is the village identity which holds a supremacy over even the tribal identity; thus explaining the central position and role of the village authority or the village council in the life of a Naga. It has been understood that the village is an independent unit, more often than not it highlights the features of a democratic republic, though women had never been given any role to play in the official functioning of the traditional village institutions. The Government of Nagaland has in this regard passed and enacted the Nagaland Village and Area Councils Act in 1978 to give legitimacy and recognition to village authorities as an institute of local self-governance. The 1978 Act mandates that there shall be a Village Council in every recognised village of Nagaland. [1] The members who constitute the Village Council are to be chosen by the villagers in accordance with the prevailing customary practices and usages, and as approved by the State Government. Gaon Buras (GBs) is a derivate from the Assamese words for ‘village elders’. They are village elders who are nominated by the Village Councils and authorized by the Government to assist the Deputy Commissioners (DCs) in the village administration. Gaonburas are assigned with the powers to ensure law and order in their respective villages or locality, as well as to act as the spokespersons of their community. Gaonburas are selected or nominated by the clan or ‘khel’ (locality) and the Village Councils forward the names to the Government for approval. They thus act as agents of the government, since their appointment comes through the law of the state government, and not way of traditional institutions themselves. A ‘Dobashi,’ is derived from the word ‘Do’ and ‘basha,’ which literally means ‘two languages.’ The post of Dobashis were created for the first time by the British administrators, appointing certain people, who were knowledgeable in customary laws and traditions, to act as translators between them (British) and the local populace of Nagaland. Their main task was to advise the government officials in the settlement of cases. Because of its practical usefulness, the system of Dobashis has followed till date, even long after the separation of the erstwhile Naga Hills district of Assam to form into the state of Nagaland in 1963. Their role however, has undergone changes. Initially, Dobashis were appointed for the sole purpose of translating or interpreting languages. With time, they were given a significant role of not only acting as translators, but also interpreters of rules and regulations prevalent in the Naga society. This led to the institution of Dobashis as deliverers of justice and pronouncing judgments in many cases. Fast forward to 2017, and it is seen that people in Nagaland still prefer the Ðobashis who preside over customary courts, also known as the Dobashis Court, which deals mainly with customary laws and its proper implementation, rather than availing the formal legal mechanisms. Dobashis pronounce judgments acting on customary precedents, and though consensus arrived at in the Village Councils. The Dobashis Courts are usually attached to the office of the Deputy Commissioner, and disputes between clans, individuals, and villages are tried as per the traditional norms as well as by making reference to the existing practices of the land. They are, in a way, the ‘transition courts’ between the codified and the ‘uncodified’ legal systems in the state of Nagaland. In case of an unsatisfactory judgment, aggrieved parties can always make further appeals to the Courts of the Magistrate or to the Higher Courts of law. While it can be concluded that the institution of the Village Council in Nagaland is built upon the traditional practices and values, there remains a number of challenges that should be overcome to ensure equity and a democratic form of governance in the real sense of the term. Given the present day context, Village Councils still refuse to admit women as members despite a number of attempts made by women’s representative organisations to do away with this discrimination on the basis of sex. Thus, there arises an urgent need for structural changes in the units of governance - both at the traditional level as well as the state level to ensure that the essence of devolution of power is achieved. Devolution of power will have meaning only if it is accompanied by the empowerment of all communities - including the women-to whom the power is devolved. [1] Section 3 : Constitutions Every recognised Village shall have a Village Council. Explanation- Village means and includes an area recognised as a Village as such by the Government of Nagaland. Art area in order to be a Village under this act shall fulfil the following conditions namely: (a) The land in the area belong to the population of that area or given to them by the Government of Nagaland, if the land in question is a Government land or is land given to them by the lawful owner of the land; and (b) The Village is established according to the usage and customary practice of the population of the area. Rakhee Kalita Moral