“What I really appreciated was that the workshp provided a space where even while working with a timer, we were be able to produce something... to write something which was very direct and to the point”.

In the first two days (19-20 December 2019), we had progressed from narrative of tension to its climax and, without knowing it, we were heading to its resolution in the writing sessions designed for 21 December by the team from Kenyon College, Ohio – Wendy Singer, Geeta Kothari, David Lynn and Christopher Glenn. The Kenyon Review[1], founded in 1939, is one of the leading literary journals in the English-speaking world and also conducts Kenyon Review Writers Workshops – fiction, science, non-fiction, poetry, spiritual writing and translation. Over the last few years the team has been coming to IIT Madras for conducting writing workshops.

To kick-start the session Geeta gave us five minutes, using a timer, to list out what we wanted to write. Following the free writing method, we were asked to choose from our wish list of writing topics … without deliberately thinking about it … and without listening to our critical voice. Writing down the thoughts as they come without regard to rules of grammar and fear of being completely coherent in free writing is useful as it allows for free flow of ideas. In course of this process, many of us wrote a good idea or two that perhaps would have got lost in self-censoring. The fact that one had to keep the hand moving for five minutes, even if to write ‘I don’t know what to write’, also meant that the inner-doubts did not have the time to surface and block the flow of writing.

We were then asked to join one of the three groups being led by each of the facilitators on fiction, non-fiction and science-fiction writing using prompts.

There were some processual commonalities across the three groups – the timer set to 5-10-15 minutes, prompts, discussions over structure of paragraph or of fiction writing, spaces for sharing without judgment, appreciation of other’s work and co-reflection, as well as encouragement to re-think the written pieces or to share them.

David leading the group on fiction writing started by reading a short story from R. K. Narayan’s Malgudi Days. He broke down the structure of fiction writing – a tension between characters leading to climax and a break through that leads to resolution of that tension. This was followed by a writing prompt - “Why didn’t you answer my text…”.  After everyone had shared their written pieces, David went on to give constructive feedback and suggestions regarding the structure of fiction writing. In Vinitha’s words “the exercise also made me realise the power of writing in groups and in the company of others, as opposed to writing in solitude and isolation…”.

The prompt offered by Wendy was to imagine how each one would like his/her work to be received a decade from now. This was followed by a role-play exercise wherein Unnayan, Vinitha, Yazhini and Mesha presented issues faced by a neighbourhood community in Delhi facing eviction before a panel of urban planners played by Aarti, Wendy, Anitha, and Uma. While Unnayan drew parallels with his field experience in the HaB project on Forest to Town: Narratives of Transformation of the Commons in Central India, for Mesha the strategy“gave a sense of how they could use their interactions with the community to put forward a case to the urban planners for a more inclusive approach toward city/neighbourhood planning in the HaB project Delhi Memory Archive: The Neighbourhood Museum Programme. For both who work with communities’ oral narratives and changing spaces, this exercise helped in generating a fresh perspective on ways to ground their writings on, of and about the community, plan their outcomes like museums and understand the oral narratives.

Geeta led the second group on fiction writing with Anitha, Dharitri, Bharathidasan, Wendy and Anandhi. She started by asking everyone to write on an issue they had been thinking of. After listening to the pieces, she instructed the group to make seven-to-ten points on what made the subject of their writing relevant, and what connected them with the subject at hand. In course of the session, there were discussions about the structure and sharing of experiences. As Dharitri shared, “I thoroughly enjoyed the idea of free writing! It was an opportunity to see how our minds work. The imagination and creativity that one can have in free writing was well understood during the process!”

Chris led the third group on non-fiction writing. We were people who were stuck in our writing for different. Starting with the prompt – “how will the world change a decade from now through my work” – Chris shared with us a short paragraph, which was a synthesis of research already conducted. He asked us to analyse and break it down. The more we discussed it the more clearly we could see the relevance of each sentence and the way the paragraph was linked. Finally, Chris asked us to write a paragraph – a research proposal related to our own work. There was a round of sharing and feedback. For me, this session was a revelation as it helped me, for the first time, to pen down the outline of a research question I had been thinking or talking about for the past three years.

In the final session of the day, the breakaway groups came together to share their experiences of the workshop. The big points that emerged were – there is value in free writing as it helps in breaking self-imposed boundaries. The ever-present timer, one that surprised us all – could assist us in writing meaningful pieces inspite of its rule. By creating a boundary within which we could write, the timer cut the scope of just thinking about what to write. Appreciating another person’s work, offering and listening to feedback, brings out the strength of writing for oneself. The workshop underscored the meaning of the phrase frequently used by Geeta and Chris during the workshop “read like a writer and write like a reader”.

The three-day workshop ended with a presentation of certificates to each of the participants followed by a closing lunch of a thali meal. The certificate was a reflection of the Storytelling & Writing Workshop. One of the photographs from Yazhini’s Exhibition, Ambedkar Nagar, near Kakkan Bridge (Chennai) was used in the certificate to underline the scope and nature of the workshop.

The Workshop as a space of collaborative pedagogy?

The workshop concluded with a resolution of a tension towards writing for all of us. The three-day experience of the schedule of Storytelling & Writing Workshop at MIDS was a meaningful one for each one of us, visible in the expressions and exclamations of satisfaction and disbelief among all of us as we stood together for a group photograph under the MIDS porch. Apart from the individual writing breakthroughs, the workshop provided us with a number of tools for further exploration in our academic journey. The workshop led many of us to reflect on the practice of writing and storytelling as meaningful acts of thinking and listening in an atmosphere of open sharing, without competition, or the fear of being judged.

By practically experiencing each writing and storytelling technique explored in the workshop – unpacking word-concepts; re-imagining a text to deploy its argument in another context or simply stating it in plain speak to comprehend beyond its technical language, narrativise a personal object/artifact/photo/image; writing with a timer and with prompts, we could see the many possibilities of enriching our writing and storytelling practice and, making it more grounded, meaningful and accessible.

One surprising trope that we practically experienced (or re-experienced) was the role-play in storytelling and writing. This appears strange given that most of the participants engage with storytelling in different ways but it was evident that we often forget to use this. The two skits/role-plays were examples of this. In the stories written on Days 1 & 2 many of us, through the design of the workshop, were surprised at the realisation on how often we edit our own voices; and to bring that in our writing can make what we write impactful. The dominant word-concepts, the self, language, themes, narratives, experiences and more were unpacked in course of the workshop and encouraged to be brought in our stories. The tools were not limited to the ones mentioned in the schedule

The workshop continued and extended the pedagogical tools and methods at the heart of the HaB programme. Writing and storytelling, as we experienced, does not take place in isolation of ourselves, and that, which is around us. The workshop brought back to our notice the value of paying attention to the sites of knowledge around us, and seeing how we relate to the world through our emotions, expressions, actions and in connecting with what really matters to us. 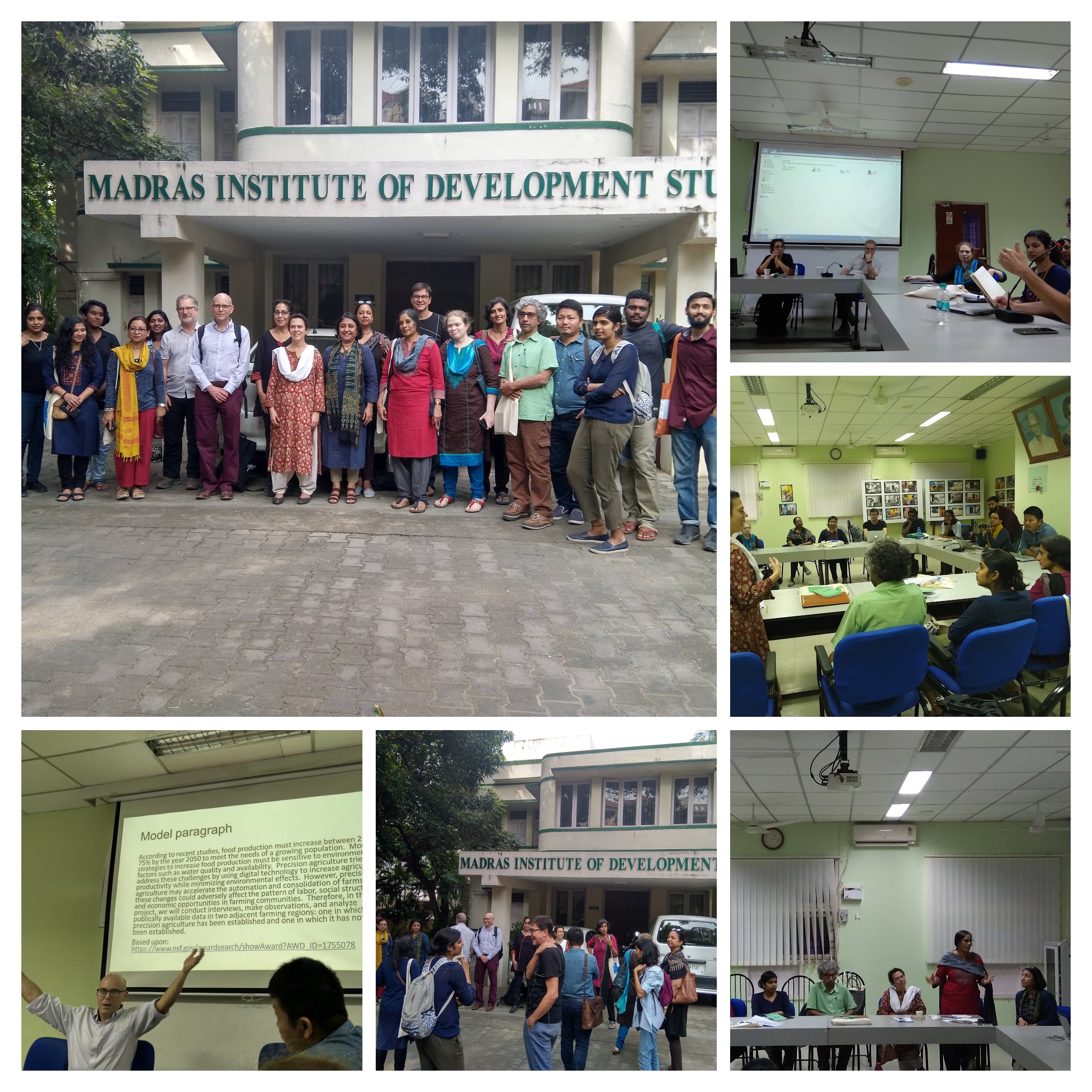 [1] For more information visit: https://kenyonreview.org/. The College has a history of encouraging its faculty, from different disciplines, to be actively engaged in writing workshops.