Before I came to the Netherlands, I had first finished my bachelor’s in Architecture at the Southeast University in Nanjing, China. It has one of the four best architecture schools in China. Unlike most other friends of mine who chose to pursue their master’s in China, I decided to take up the challenge of going abroad, which was not very common or popular in the early 2000’s.

The Netherlands opened up another door behind which were many thrills and great experiences. After I received my Master of Science degree with a specialization in Urbanism from the Delft University of Technology (TUDelft), it took me a short time to find my first assistant architect job at one of the most world famous architectural offices in the Netherlands. That was a good starting point for my training as an architect. It was fun but intensive.

It might be my destiny to go back where I have started. In 2015, I was called by the Urban Knowledge Network Asia (UKNA) program’s scientific director, my old TUDelft classmate as well as friend, to work in Delft as the UKNA coordinator. Very soon I started my position as program coordinator at the International Institute for Asian Studies (IIAS). Alongside the UKNA program, I have been also coordinating the activities of the Southeast Asia Neighbourhoods Network (SEANNET) program together with our colleague Paul Rabé. I have successfully organized several academic events, including the UKNA roundtable in Delhi 2016, SEANNET launching event at ICAS-10 in Chiang Mai 2017, etc.

Currently IIAS has two externally funded programs, one is the SEANNET program (2017-2020) supported by the Henry Luce Foundation; another one is the Humanities across Borders (2017-2020) supported by the Andrew W. Mellon Foundation. It is a great honor to be involved in both these programs. The most special part for me is to participate in something that is very common and routine, such as food, language and memory, but viewing it in new and creative ways. I find this process very fascinating and interesting.

For the Humanities Across Borders program, I will be based in the Netherlands and working closely with the program director and the financial controller.

Samen Alleen/We are Together
3 April 2020
Image 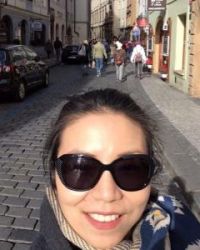