Faced with a certain precarity of life, I decided to leave the country then known as Burma in my late teens in the 1990s. While most of my peers adjusted to frequent shutdowns of universities and increasingly tight regimentation of students’ lives, I thought I could not survive a suffocated life with limited freedom of thoughts and expression. Little did I know that while education abroad opened up opportunities and presented privileges, it also created barriers between the ‘new’ me and the country, cultures, and people I left behind.

I ventured out of the country to explore the ‘West’ but down the road I came to realize that I did not and still do not know the ‘East’, particularly ‘Burma’ or ‘Myanmar’.  Once determined to become a medical doctor, I ended up a Burmese historian.  In Burma, though ‘West’ as an all-encompassing term for consumer products, modern entertainment, militaristic and other technologies is most often viewed and understood as privileged, superior, authoritative and such, other parts of the ‘West’ are carefully scrutinized. Western education is viewed with suspicion, and when I offered myself, fresh out of my PhD program, to Myanmar Universities, all the professors I talked to, though apologetically, assured me that I would not land an academic job there since one must go through the local system (of educating, vetting, etc.) to join the ranks.  Popular slogans and nationalist propagandas such as “Burmese Way to Socialism” or “Disciplined Democracy” reflect the country’s emphasis on the distinctiveness or the differentiation of itself from the other(s).

But I believe I can still bridge the gap between myself and my current academic community, which is exactly 8,357 miles away from Yangon, to academic communities and the wider society in Myanmar.  And the HaB program is an important vehicle for that.  Through the HaB program, I was already able to link with many dynamic universities in Myanmar, most notably Mandalay University and Yangon University of Distance Education and active members of the civil society including Rainfall, PEN, etc.  And since HaB networks are vast, I will also be able to assess innovative ideas and diverse civic engagement programs around the world championed by other HaB partners.

What I envision within this HaB program is two-fold: 1) To engage with communities through research and include civic engagement programs in the courses I teach at the Northern Illinois University and 2) To work together with international universities within HaB to reexamine the humanistic pedagogy and re-imagine the civic role of a university so as to develop curricula that embed and reflect the problems and challenges of our students and that could empower and enable our students to find their own solutions that are (hopefully) different and better than the existing ones.  Everyday interactions with my students, some of whom witness the worst racism, social injustice,  ill-effects of the failed incarceration system of the US first-hand, hunger and poverty in the land of plenty as well as ongoing struggles for democracy, freedom of expression and human rights issues in my native country will be the driving force behind my project.

The Cultural Production of Dissent in Myanmar
24 August 2018 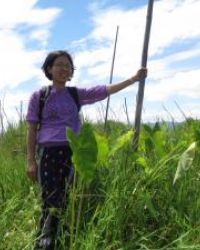 The Cultural Production of Dissent