I have just finished my bachelor's degree majoring in Thai Studies in 2018 from Chiang Mai University. During my study, I, like other students, was focused on getting a high GAP. However, last year was a turning point in my life. I questioned myself on what my goal in life will be. The big question was answered when I decided to do my internship program in a highland ethnic community named, Huay Hin Lad Nai.

In two months, I learnt a new way of life, culture, tradition, and belief system of the Karen ethnic community of Baan Huay Hin Lad Nai. During my stay in the hospitable and generous community, several questions emerged in my mind such as: How were they able to live and adapt in the forest?; What were their values and belief systems?; Why did they not rely on modern technology? and etc.

At first, I was not sure whether I could live like them or not. Though after two months had passed, I thought that I still didn't fully understand the way of life of the Karen people. However, I have learned to be more self-reflective. Not until the internship, did I have an idea that there's a need to be the voice of an ethnic community. The villagers and researchers of the Chiang Mai University's Center for Ethnic Studies and Development encouraged me to be a researcher. Through this profession, I have decided to be the voice and to empower the livelihood of the ethnic groups who are facing the exclusion of the capitalist economy and globalization.

Learning While Walking in the Forest: Where the Village Practices Shifting Cultivation
6 March 2020
Image 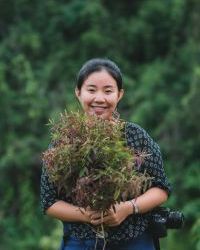 Living in and with the Forest in Northern Thailand