The History of Doing: An Illustrated Account of Movements for Women’s Rights and Feminism in India, 1800-1990, Radha Kumar (1993) 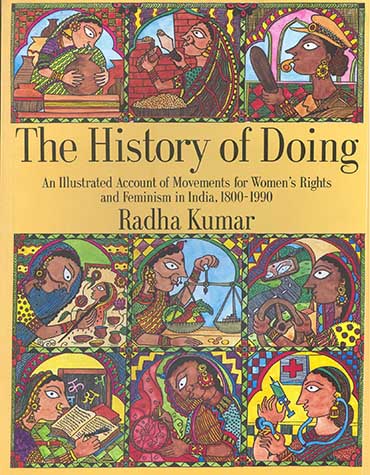 Published in 1993, The History of Doing: An Illustrated Account of Movements for Women’s Rights and Feminism in India, 1800-1990 by  Radha Kumar is a landmark work on the women’s movement in India. It was brought out by Kali for Women, India’s first feminist publishing house, which, along with its imprint Zubaan, has been responsible for some of the finest scholarship on women in South Asia.

From Zubaan‘s website: “A thematic history of the women’s movement in India both before and after independence, this book covers the period from the nineteenth century to the present day. It looks at how women’s issues were raised, initially by men and as part of the movements for social reform, and then with the involvement of women in the nationalist movement, by women themselves. Using photographs, old and new documents, excerpts from letters, books and informal writings, the author documents the growing involvement of women and the formation of the early women’s organizations, she examines the foregrounding of the ‘women’s issue’ during the reform and nationalist movements and its subsequent disappearance from the agenda of public debate until the post independence period of the Sixties and Seventies when it surfaces again.”

From Google Books: “Key questions raised are regarding the nature of the contemporary movement, the kinds of issues (such as rape, dowry, environment, work, health) it has taken up, its directions and perspectives, its differences from western movements, the role of autonomous women’s organizations and their relationship with political parties, especially those of the left. Visually rich, this book provides a wealth of information in an easily written and accessible style and should appeal to a wide cross-section of readers.”