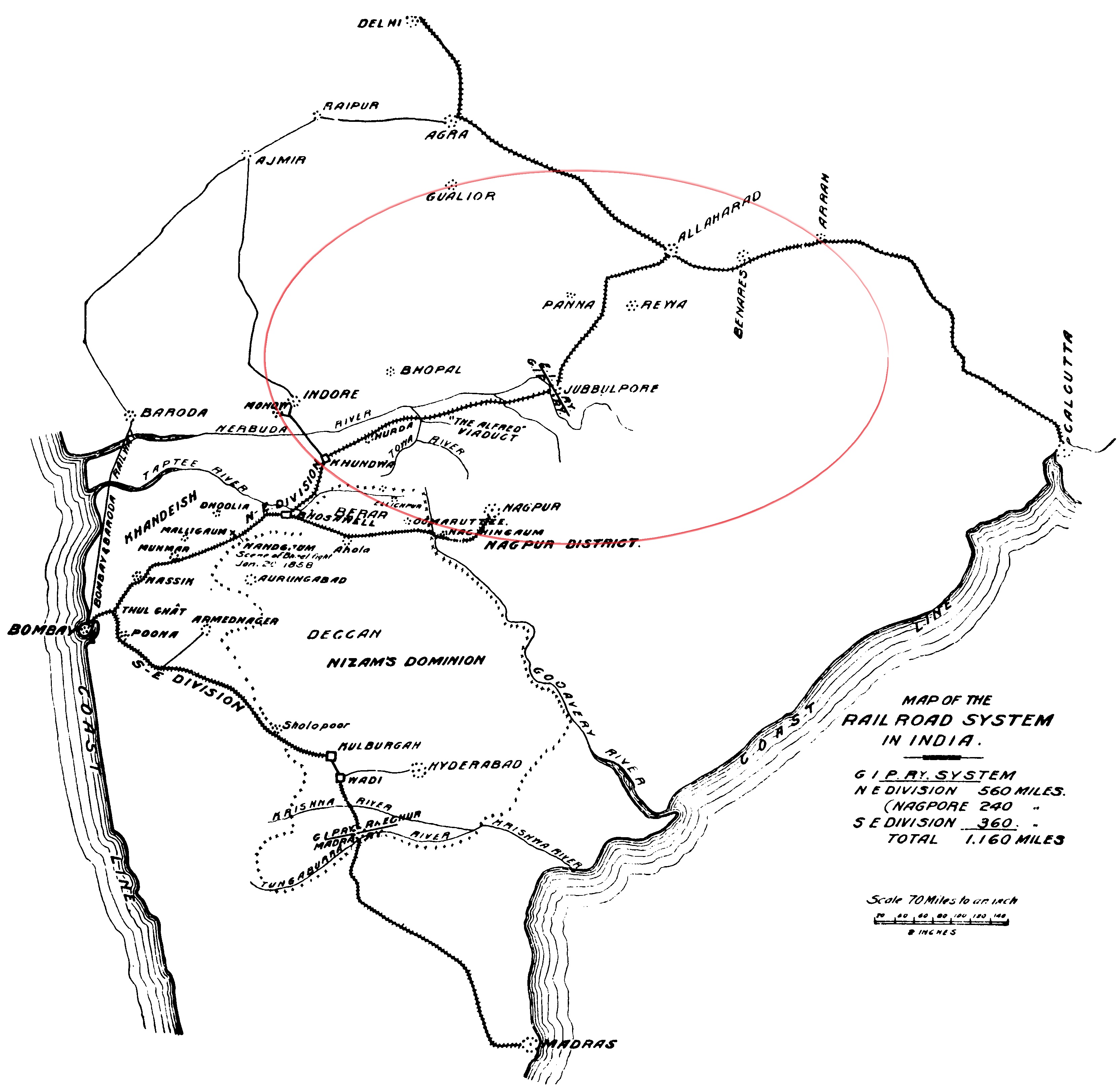 From Forest to Town

Pipariya, as pointed by a number of early settlers of the town, shares its’ initial history with a section of railway line that was laid out during the colonial rule to connect the cities of Bombay (present-day Mumbai) and Calcutta (present-day Kolkata). While the Allahabad-Jabalpur branch line was opened up by the East Indian Railway (EIR) in June 1867, the Great Indian Peninsula Railway (GIPR) connection reached Jabalpur from Itarsi on 7 March 1870, linking up with the EIR track there from Allahabad, and establishing connectivity between Mumbai and Kolkata (highlighted in the red circle in the image).

With the advent of the Itarsi-Jabalpur section, several railway stations were also set up on the line. Reportage of a traveler’s journey on this particular section was published in the popular Hindi magazine 'Kavi Vachan Sudha' (Edition: 20th July 1872) under the title of 'Ek Madhyadesh Yatri.' Spearheaded by the noted Indian writer, playwright, and poet Bhartendu Harishchandra, the magazine used to carry a section called 'Sampadak Ke Naam Patr' (Letter to the Editor), where the readers sent their entries in form of prose, verse, reports, and book reviews. The following reportage has been translated from Hindi. Apart from clearly stating that Pipariya didn’t have a railway station on the line in 1872, the narrative also gives us an idea of the landscape that the present-day town was borne out of some odd 150 years ago:

“I boarded the GIPR train and bought a ticket from Jablapur to Itarsi for Rs.3. This is a particular type of train. While East Indian Railways (EIR) trains have different divisions, this train has a uniform layout from beginning to end and looks very ugly. The coaches are crammed with people and there are no facilities even at the platforms and stations. Two or three men in my coach were shouting for water. The guard replied curtly with ‘Can’t help.’ Pray, tell me, if someone were to die on a sunny afternoon because of this, wouldn’t the company be held responsible? To tell you about the stations, there are a total of 7 stations between Jabalpur and Itarsi: Chidwara (present day Chhindwara), Nrasinghpur (present day Narsinghpur), Gadawaraye (present day Gadarwara), Bakedi (present day Bankhedi), Sohagpur, Bagra and Itarsi. There is hardly anything that you will see apart from the mountains and thick forests on both sides of the whole stretch. For miles and miles, there is no sight of any village or soul whatsoever. The forests are so dense that the sunlight doesn’t reach the ground at many places. You can imagine what kind of place this must be. I could only see wide fields and pastures once I got out of the train at Itarsi. I will write about rest of the journey in the second letter.
Sincerely”