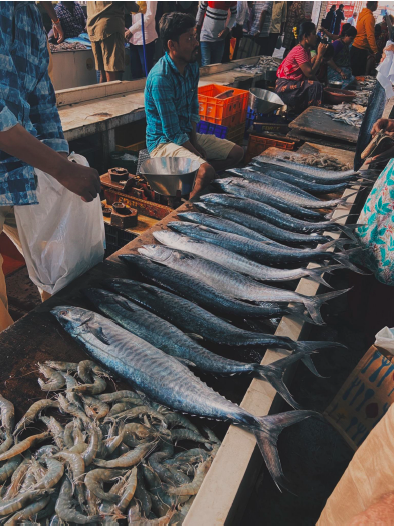 Nestled in the Western Ghats on the coastline of the Indian peninsula, is Goa- a small state that was colonized by the Portuguese around 500 years ago and became a part of the larger Indian State in the 1960s. The confluence of this Indo-Western heritage amalgamates into a fascinating melting pot of culture. Goa, which is now a renowned tourist destination, has always been for me, home.
As one can imagine, living amidst the sun, sea and sand is romantic in many ways. But what has always remained a characteristic feature of the place has been the food- particularly the fish. Having transitioned to vegetarianism since moving to The Netherlands, eating fish has become a memory that is associated very closely with the idea of home. ‘Nutse’ or fish, wasn’t just consumed thoughtlessly. It was a whole experience- waking up on a Sunday morning, going to church with the family, then stopping by at the fish market, we would spend hours at the fish market. You come home and clean the fish, and then devour a fresh fish-curry-rice meal for lunch. You would usually buy enough fish on the weekend to last you the week.

Every Goan child grows up with the knowledge of how to identify the freshest fish, how to bargain with the vendor and how to accustom to the distinct smell of a fish market. In retrospect, the fish market is in itself a very cultural and political space. It is a place of enculturation, social interaction, and varied forms of social contact. The market freed people from social restraints and divisions, in a sense. All classes mingled together at the market, which gave the market an equalizing quality.

When I travelled back home recently, I decided to accompany my father to the market after ages. The pictures above were taken at my local fish market. But it was interesting because the smells and bustle of the market were the same as what was ingrained in my sensory anthropology but some things were different. The bargaining sounded different to me because the prices suddenly dramatically increased. There weren't as many fishmongers, and also not as much fish. Talking to my father, and some of the fishmongers (with some translation help from my father), I learnt an important insight about the politics of the fishing industry. And suddenly the seemingly benign activity of buying fish on a Sunday afternoon suddenly had much larger implications.

Incidentally, Goa has been in the limelight for its environmental degradation issues for quite some time now. Especially in 2020 with the rise of a movement against deforestation by development projects. Unfortunately, the coal mines are another major source of not only environmental but also social and cultural contamination.

In many regions of Goa, mines are destroying forests, rivers, beaches, and the sea, while the state administration is powerless to protect coastal ecosystems, mangrove forests, and sand dune vegetation. If the Mormugao Port Trust (MPT) is able to dredge its canal and expand its moorings for coal management, it will be the end of local fishermen's livelihoods, who believe they will have no choice but to leave their villages and enterprises. The "Goa against coal" and "Maka coal Naka" movements were started four years ago.

The government has also planned to expand the Port in favour of MPT without consulting the local fishing population. Many types of fish have vanished from the Bay region Vasco; in most situations, oil spills and shipwrecks are other causes of pollution for our water.

Moreover, urbanization is incentivising fishermen to quit the ancient craft of the catch and seek greener pastures.

By Nadine Monteiro as part of the LUC project "Decolonising the Plate" led by Dr. Maja Vodopivec