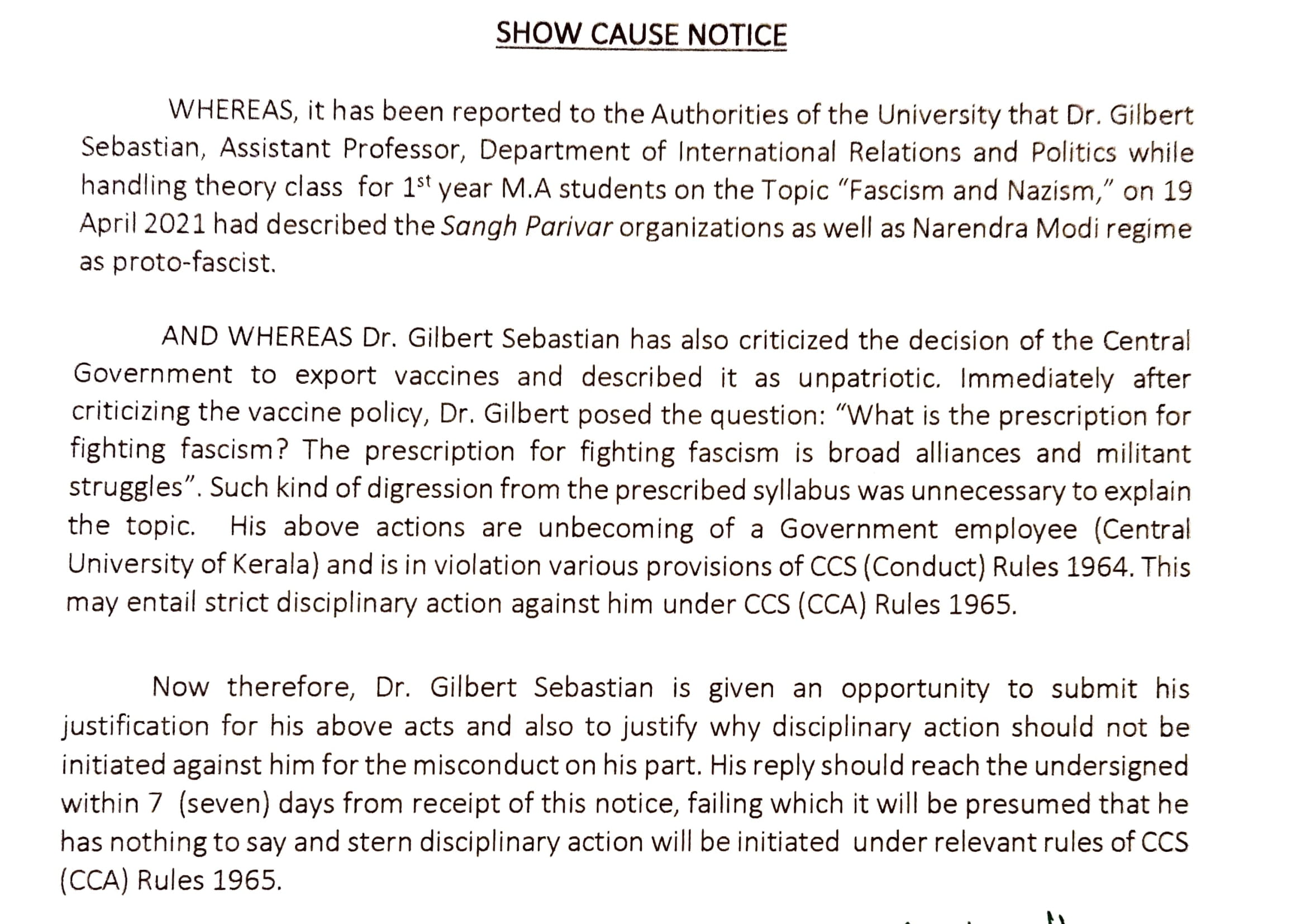 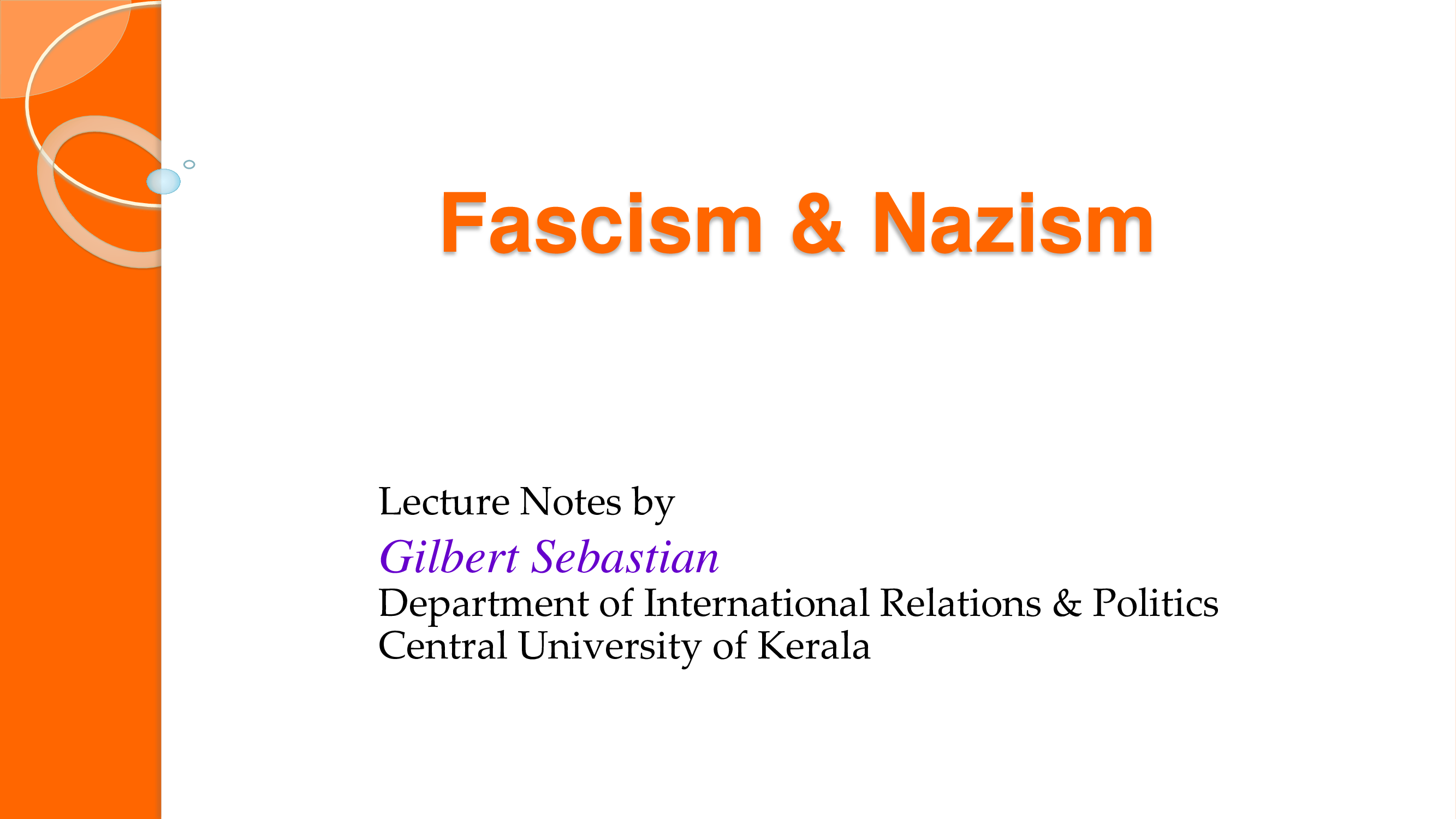 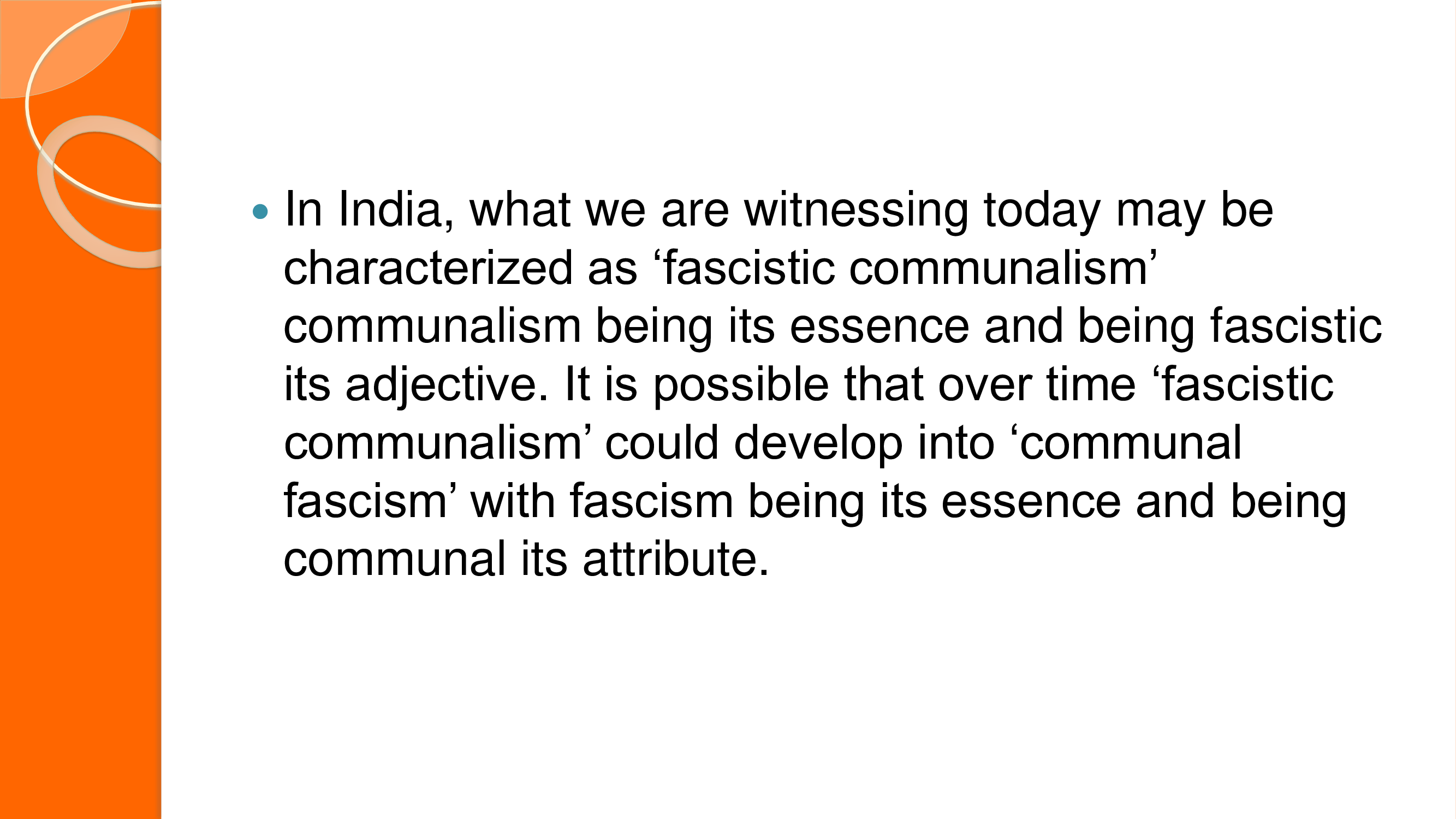 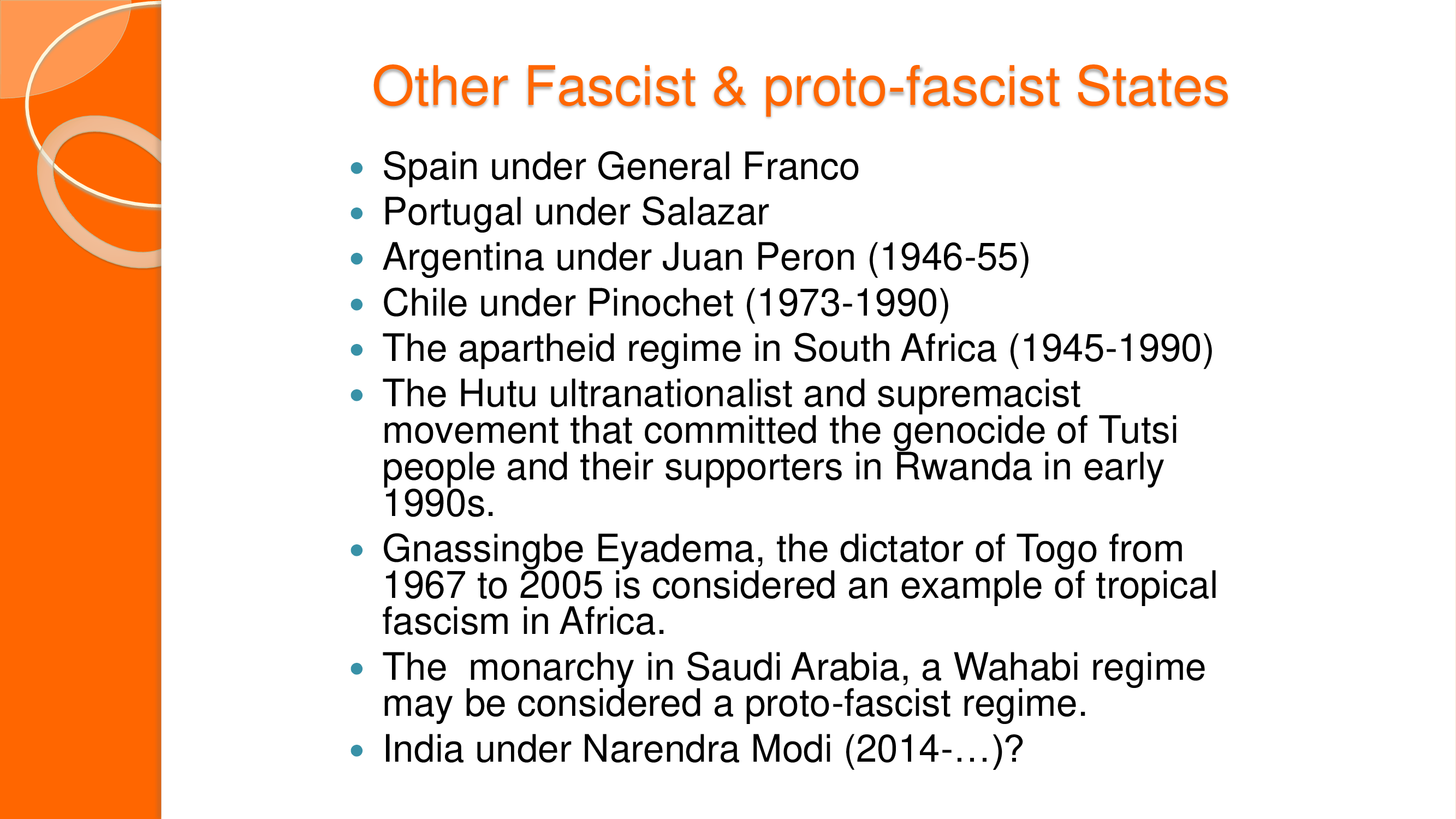 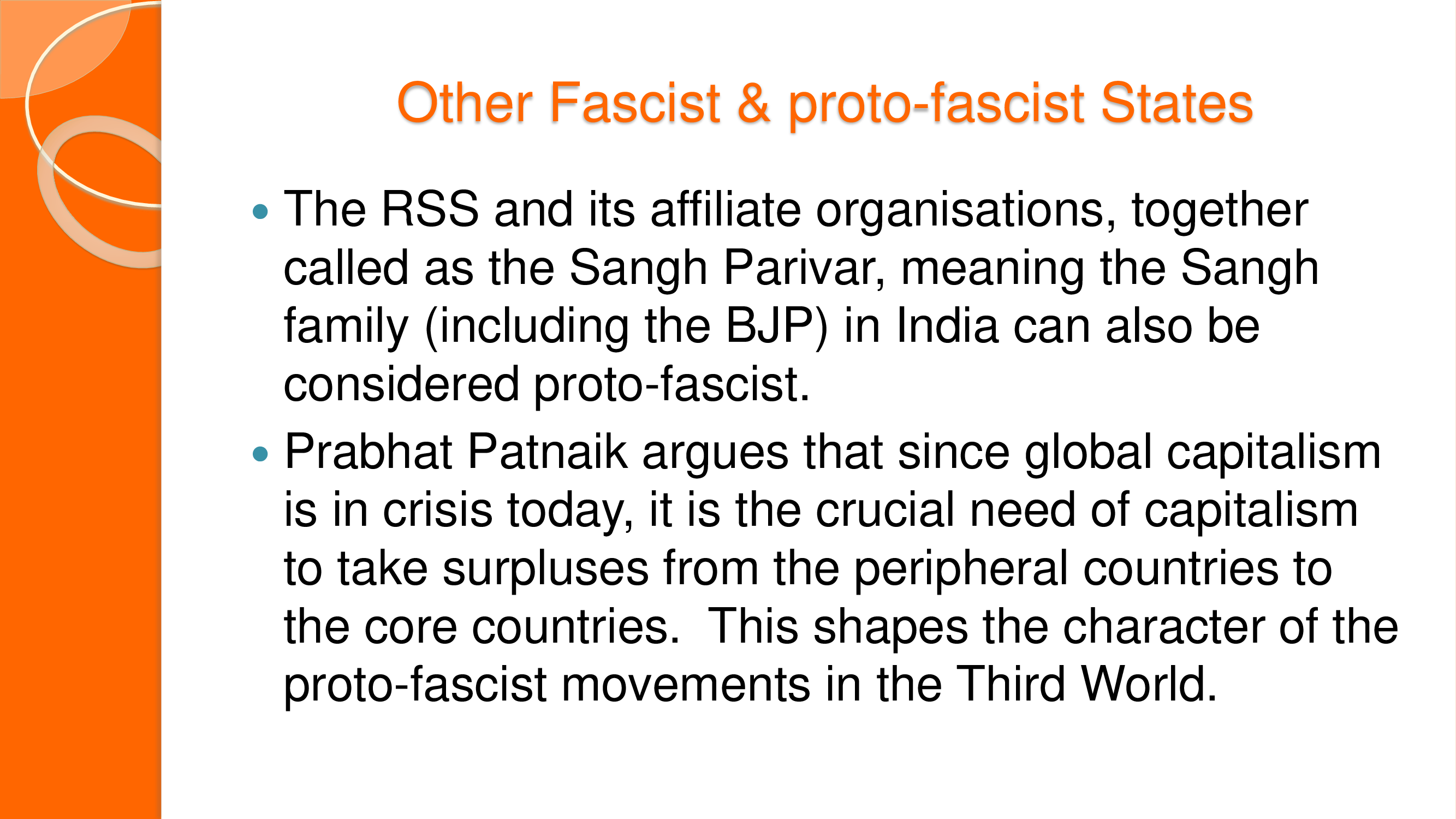 This is regarding the suspension and the warning letter issued to Gilbert Sebastian, Assistant Professor in the Department of International Relations and Politics, Central University of Kerala for views expressed during the class on 'fascism and nazism' on 19 April 2021. In the class, he expressed the view that the RSS and the BJP might be considered 'proto-fascist' and a question was raised whether India under Narendra Modi since 2014 could be counted in among other fascist/proto-fascist states such as Spain under General Franco, Portugal under Salazar, Argentina under Juan Peron, Hutu supremacist state in Rwanda, the Wahabi regime in Saudi Arabia, etc. (The term, 'proto-fascism' was inspired by the concluding chapter of the book by Prof. Barbara Harriss-White in 2003, India Working).

The political right wing in the university got the class leaked out to the Hindutva/Sangh Parivar-affiliated media outlets and began a deadly vilification campaign against him. Sangh Parivar alleged that he had called for militant struggles although he had mentioned broad alliances and militant struggles, as the international prescription for fighting fascism with reference to the 2nd World War. They also objected to the mention that 1934 France could be a model for fighting early fascism. The vilification campaign, in turn, generated immediate solidarity with him from the religious minority organisations, especially of Muslims, the Congress-affiliated organisations, the CPI(M) and CPI-affiliated organisations, some legislators including Shashi Tharoor, some teachers' associations including the Federation of Central Universities Teachers' Associations (FEDCUTA), students and academicians. The solidarity and support was pleasantly surprising and inspiringly showed that India does have the vibrancy to resist illiberal tendencies. The following writeups may give a fairly good idea about the issue:

(The warning letter is given at the end of this coverage and is clearly violative of academic freedom).

Suspension and Warning for Views Expressed in Online Class