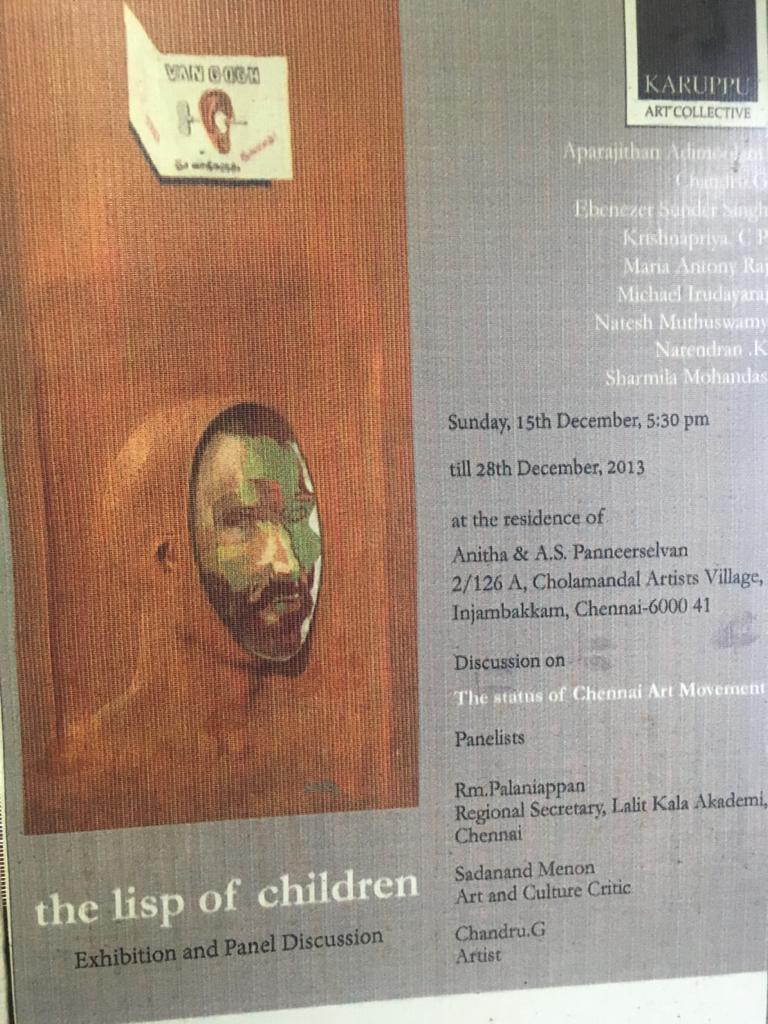 The Lisp of Children

Apottamkulam Pottamkulam wrote The lisp of children as part of the workshop session on Reading/Writing/Re-writing/Telling/Re-telling using prompts, 20 December 2019.

In December 2013, we held a contemporary art exhibition at our home titled ‘the lisp of children’. The exhibition was for a month and featured artists from the Government College of Fine Arts, Chennai. The eldest was G. Chandru, a former principal of the college and the youngest was C. P. Krishnapriya. There were several events as a part of this show – the discussion that you see on this poster, a talk by Tamil writer Imayam, contemporary dancer Preethi Athreya ,  the screening of the film Yadhum by Kombai Anwar, songs by Kumari Aboobacker as well as the documentary on Velu Viswanadhan, an artist and part of the founding team  of Cholamandal Artists Village. It was on 50 years of his life as an artist … really the same age as the village.

The documentary had previously been shown only in Paris, possibly at the Kochi Biennale but the screening at my home was the first in Chennai/Cholamandal where it all began. Why was this being shown at my home, clearly not a place that is usually associated with such a significant event?

Viswa had expressed to the Committee of the Cholamandal Artists’ village his desire to screen the documentary at The Gallery, modernised and refurbished in 2013.They asked him to pay a fee. Hurt, angry and dejected, Viswa refused to do so … the Committee didn’t budge.

We were then anyway planning this exhibition. We met Viswa and told him that we would be honoured and delighted to screen it as a part of ‘the lisp of children’.

My home too is located within the Cholamandal Artists Village – we are two non-artists who live in that village; and the activities or non-activities of what is considered a very important institution of Contemporary Art in India swirl around us. Founded in 1967 by K. C. S. Panicker, a former principal of the Government College of Fine Arts and S. Dhanapal, the Village is considered integral to the Madras Art Movement. Both, scholars those write on art movements in India and the artists living there, say “Where else can you find a self-reliant artist community like ours? Which other community has built its own museum?”

But it’s really been a while …. and only questions pile up.