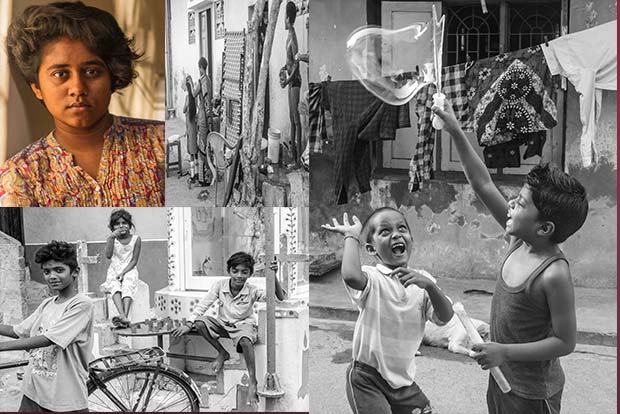 The photographs were part of an exhibition, Ambedkar Nagar, near Kakkan Bridge, Chennai, by Yazhini A. held at Lalit Kala Academy, 6-12 December 2019.

Imaginations of a Street

Mesha Murali, Senior Research Assistant, Centre for Community Knowledge, Ambedkar University Delhi, for her story took inspiration from all the exhibited photos for the session on Reading/Writing/Re-writing/Telling/Re-telling using prompts, 20 December 2019.

I saw people sitting on the street, outside their houses, talking, eating and enjoying the passing day. Children were playing games, laughing, dancing to music and being asked by their parents to stay at a safe distance from the main street.

Most of you must be wondering, “Why is she describing what we see in the photographs”? But that is not what I am doing. I am instead describing the street life that I observed during my visit to Leiden, Netherland.

Looking at Yazhani’s photos immediately took me back to all the streets I have walked on, in Leiden and in Delhi. To me it is interesting how streets in different cities and countries witness a very similar life cycle, with the difference of cultural outlooks and imaginations.

In an Indian city, be it Delhi or Chennai, sitting on the street or letting your personal space spill over to the street is constantly looked down upon. It is seen as a marker of social class – those who sit, eat or socialise on the street ‘belong to the streets’.  On the other hand, if a similar scene were to play-out in an European city, the way we would read it would take a full u-turn. For our colonised minds, anything that happens in the global west is romantisied and aspirational. Even eating on the street! On the other hand, we constantly work hard to disassociate ourselves from the streets in our own cities, which are seen as fit only for our cars.