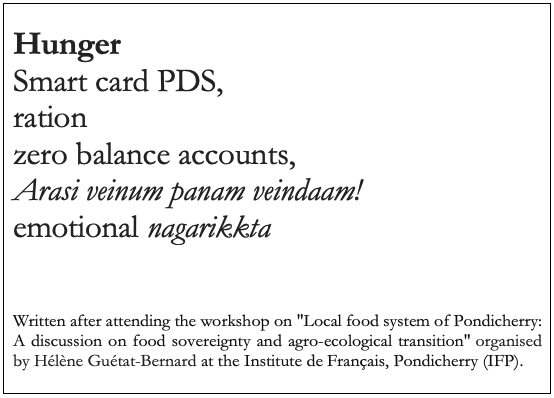 This haiku encapsulates my impression of the debate titled 'Cash or kind transfer? The regional, national and global dimensions of revamping the Public Distribution System' facilitated by Augustin Brutus, a scholar activist (Intercultural Network for Development and Peace) and post-doctoral scholar at IFP, Nithya Joseph, at the Pondicherry workshop.  The participants included Sudha Sundaraman, of the AIDWA (All Democratic Women's Association) and members of the local women's group SAMAM (Samam Makalir Suyasarbu Iyakkam). The debate on whether to dismantle the PDS or not, followed an introduction to the question by Reetika Khera, Associate Professor at the Indian Institute of Management, Ahmedabad, who gave us a broad picture on the national policy and state-wise implementation issues of India's PDS, using evidence from field-based interviews of users of ration cards (as they are called) from across the country.

The room was filled with women farmers and activists and the discussion took place in Tamil interspersed with succinct English interpretations. The women were candid in their sharing and many spoke up against the DPT. Reetika, I noticed was thrilled to collect more evidence on the cash vs. kind controversy that was raging around the new government scheme that was being piloted in Pondicherry.

And while there are many academic arguments that credit or discredit the new DPT scheme, it was clear from the responses of women, the end-beneficiaries of the PDS, that they were concerned about going hungry. The introduction of smart cards, and zero-balance accounts were meant to facilitate the DPT scheme as part of the governments rural financial inclusion drive. But how many women can leave their homes and walk to the bank, stand in line, be proficient in using their accounts and then, even after receiving the money, negotiate with other members regarding its apportioning in the household budget. The ration shop is usually closer, a member of the family or neighbour can carry the rice and other provisions and bring it home and a meal, however meagre, is assured.

The issue was emotional and clearly about citizenship rights at a time when the ruling government was pushing the Citizenship Amendment Act (CAA) along religious identities.