On the weekend of 10th, 11th, and 12th of December 2021, if you found yourself on the campus of the University Gaston Berger in St Louis, Senegal, you would have witnessed the first edition of the pan African Street Food Festival, hosted by GAEC-Africa (Groupe d’ Action et d’Etude Critique – Africa), a network of volunteers, professionals, thinkers, social activists, students and teacher-researchers who want to support the rights of vulnerable and discriminated people and groups who are victims of historical, cultural, political, epistemic, economic, racial and social injustice.

Food as an opening to dialogue

Held as part of the food theme or ‘site of knowledge- and meaning-making’ of the HAB and titled Atelier Populaire (https://humanitiesacrossborders.org/projects/atelier-populaire), the food festival is also among GAEC’s initiatives to promote action-research through the organisation of popular workshops, awareness campaigns, advocacy, experiential schools, as well as the development of curricula which calls for a decolonisation of pedagogies in higher education. The GAEC’s team, Abdourahmane Seck, Bruno Diomaye Faye, Diéynaba Saar and Mansour Dong, together with the volunteers Jeanne, Mariama, Louise and all the many other actors from Dakar to Saint-Louis have worked many hours to make the event a success. The festival featured many activities such as photo exhibitions, nocturnal performances, food tasting and awareness raising, ensuring different modes and levels of engagement with food and food practices. Participants were invited to reflect on the past, present and future, using food in the life of ordinary people. They were asked to share their vision for the continent of Africa as citizens in dialogue, as a counterpoint to the views of policy makers influenced by past colonial policies and structures of power and authority. Encouraging dialogue across different stakeholders, the stated goal of the festival was to raise awareness among consumers in St. Louis, on how food and dietary choices can help “regain (our) compromised sovereignties, but also to give back to nature the respect and protection we owe it.” 1

Street food (preparation, vending and consumption of food on the street) is a significant part of life in many African cities, such as Saint-Louis. While street food may have traditionally been perceived as a sign of poverty, this perspective has shifted since the 1990s. For various economical and lifestyle reasons, more and more people have started consuming most, if not all, of their meals in the street.2 This boom in street food retail has brought some amount of public awareness to the many challenges that such dietary habits pose. In 2014, experts at the World Health Organisation (WHO) noted that for sub-Saharan Africa: "5% of men and 15% of women over the age of 18 were obese. (...) that 8% of adults over the age of 25 had diabetes, which is expected to double by 2035, while hypertension would affect 46%".3 While the role of physical exercise is not negligible in the development of these health statistics, the main identified factor is the quality of the diet. For instance, the very location of where the food is being prepared, the food stands in the street, known as gargotes, raise several concerns. They are located in the main arteries and corners of the city, as such exposed to dust, flies and other insects, and susceptible to contamination and disease. Within the gargotes themselves, hygienic conditions for food preparations are often not maintained or possible.  For example: all the utensils are washed in the same container without disinfecting the water. The very popular food prepared in gargotes such as ‘Dibiterie et borom bol’ which are prepared with meat, are also a major health risk as the meat is often not stored properly (no fridges on site, or very small ones). Beyond sanitary risks, many popular foods are unhealthy, have too much salt, not enough vegetables, added sugar and bouillon for better taste, etc.

Street food has wider implications, beyond those of dietary convenience, taste, nutrition, sanitation, and health. Despite the popularisation of street food as a livelihood option, many African communities are struggling to take full advantage of this development stated to be a boost to the economy. Therefore, it is not only a matter of the overall economic impact of street food, but also about the different roles played by locals, visitors and tourists. In addition, the fact that street food is prepared and consumed in the street itself, rather than in a restaurant or a home kitchen, further highlights the importance of the street as a significant ‘place’ of food consumption and conviviality. Eating food in the street reveals, not only the daily rhythms of people’s lives but also, the interactions and connections people make beyond their families and communities and the attachments they have through food.

Food festival: an example of a citizen’s dialogue forum and local fair

The citizen’s dialogue forum and fair, like the Roundtable, has been at the core of the HAB’s methodology, as it favours a horizontal exchange of knowledge among multiple stakeholders on topics of local significance. The food festival at Saint Louis enabled different actors and agents of food production, consumption, and distribution to come together and exchange, reflect and contribute to change. Consumers, processors, agronomists, teachers-researchers, producers, students, pupils, people from the neighbourhoods, opinion leaders and political decision-makers all gathered and discussed the many concerns around food, particularly to raise awareness about the local and regional food system.

Such a space for dialogue empowered local actors to take the lead in discussions whilst participating in the many activities on offer at the festival. Such an approach to food also brought about new ways of looking at the subject as it facilitated the inclusion of voices that would have either been ignored or simply not seen relevant by policy makers or theoreticians. The Saint Louis festival demonstrated that the open platform of the festival resonated deeply with both the participants, and students, who found their own thoughts reflected in the words of co-participants. The festival fostered mutual recognition of the importance of local biodiversity and the production, processing and consumption of traditional grains, snacks and recipes. By unburdening the topic of food in the light and convivial atmosphere of a fair, the festival encouraged equal and collective reflections and contributions towards actions on food safety and priorities in street food retail.

Impressions of the festival

The GAEC-Africa volunteers set up a publicity table around the university cafeteria, a strategic point frequented by students during the day. Thousands of students received documentation and chatted with the volunteers. For most of them, this is the first time they heard about the collective. A few statements from the students are enough to show that the very idea of a decolonial collective and its proposed actions already had its effect: students were already thinking about their own relation to food, the consequences of their food choices and the different practices around food. In the evening, the volunteers set up the stage for the activities for the next day. Many students that they chatted with during the day came to help too. 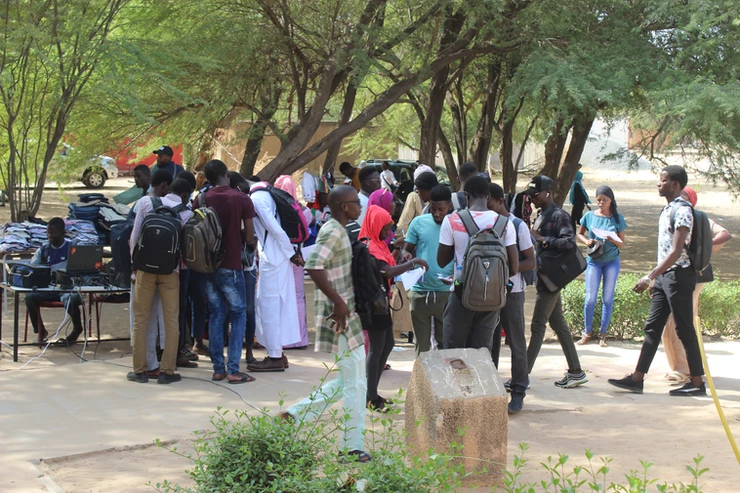 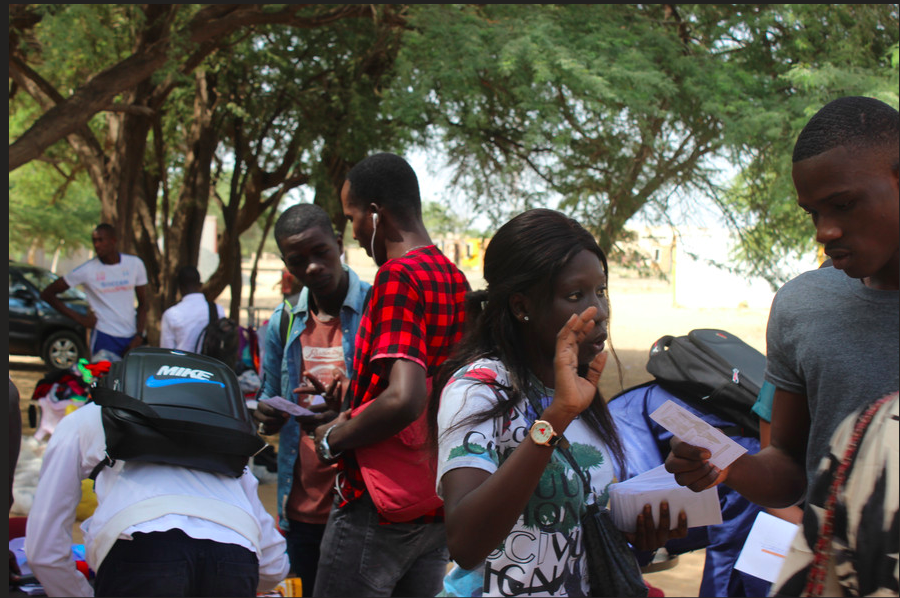 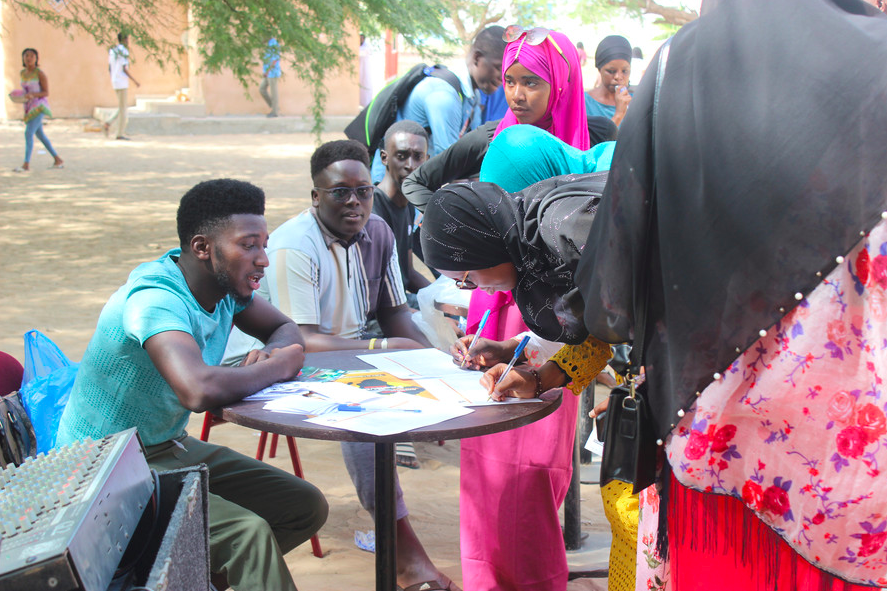 The participating communities included Togo, Mali, Burkina Faso, Niger, Mauritania, Benin, Gabon, Côte d'Ivoire and Senegal. Food stands, music, informative points… The visitors were taken on a traditional foods journey and were encouraged to try the food, and interact with the cooks as much as possible. In addition to information about food, the information points also related the stories of historic figures of the region: Lumumba, Cabral, Sankara and Shaka Sankofa. Painting and graffiti are also on the agenda as two painters and two graffiti artists are at work. The rest of the day and evening are punctuated by performances by singers and rappers, but also by theatre groups, all at work to raise awareness about local food varieties, food chains and their link to the local ecology. 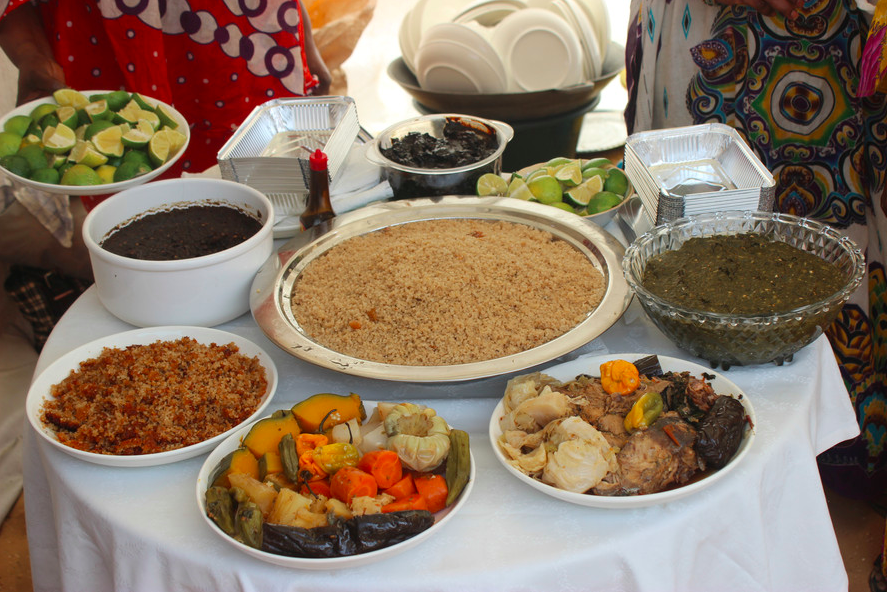 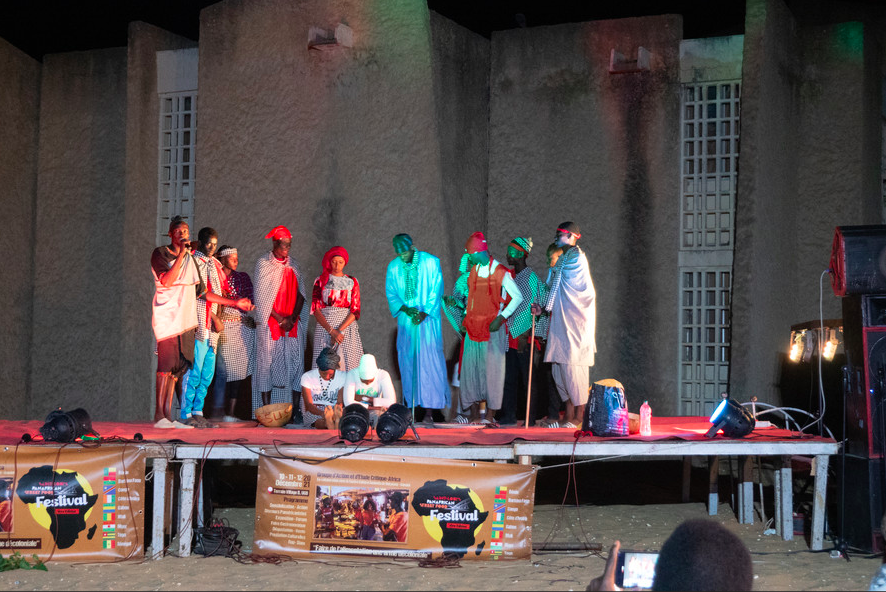 The last day of the festival featured many panels and discussions around the challenges surrounding a healthy, balanced and just diet. Several participants discussed and presented their views around these issues.

Seydou Ba, chef, focused on the issue of weighing the ingredients. His main attention is the fight against excessive consumption of food products, which can lead to health complications. For Fatou Kholl, an eco-guard, the priority is to transmit African gastronomic culture to young people who must be initiated to the knowledge, virtues and possibilities of local products.  As an eco-guard, she also reminds the audience of the importance of adopting responsible behaviours towards nature, which is our first and last resort.

Saer Diallo, nutritionist, went over some key figures. 40% of the Senegalese population suffer from high blood pressure. Diabetes is no less of an issue. Practically one out of every two St. Louisans is said to be diabetic. The extremely high prevalence rates of chronic non-communicable diseases thus seem to point to a national health emergency which, to a large extent, can be dealt with by changes in eating habits.

Bathé Boye, food processor, stressed the quality of the efforts made in the field of food processing and invited African societies to take a greater interest in it.

Muhamad Bâ, economist, talked about the reform of food consumption habits which can have a direct and consequent effect on the structure of Senegal's trade balance deficit. For him, the extraversion of the production and consumption system is a pillar of underdevelopment.

Salimata Wade, professor, insisted on the importance of forward-looking diagnostic actions to be promoted. She indicated that food transformation is an essential option to fight hunger, but also to free women and guarantee them time to do other things.

Abdou Seck, scholar and principal investigator of the HAB, insisted on the crucial turning point for food systems in Africa. He stressed that there are as many reasons to fear the future as to look forward to it, and that, as a result, everything will depend on the strategic choices we make today. We can either continue to buy food services on globalised and distant markets and thus run the risk of periodically experiencing shortages like those Europe experienced at the beginning of the Covid-19 pandemic, or we can preserve the green belts on the outskirts of our cities and support small producers and retailers, in short, preserve the very short chains that go from the garden to the plate. Furthermore, returning to the issue of street food, he gave the example of Asia and invited the participants to take up the challenge of making it an attractive sector and a carrier of value chains.

You can see some extracts of these presentations in the “tutorials” section of the GAEC-Africa blog. 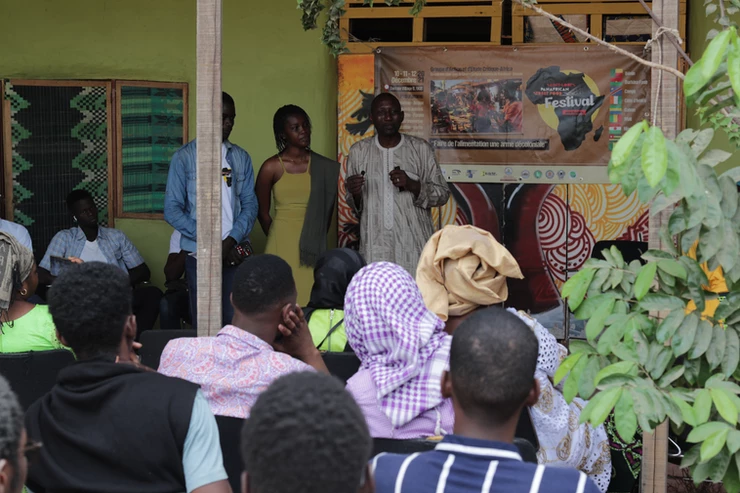 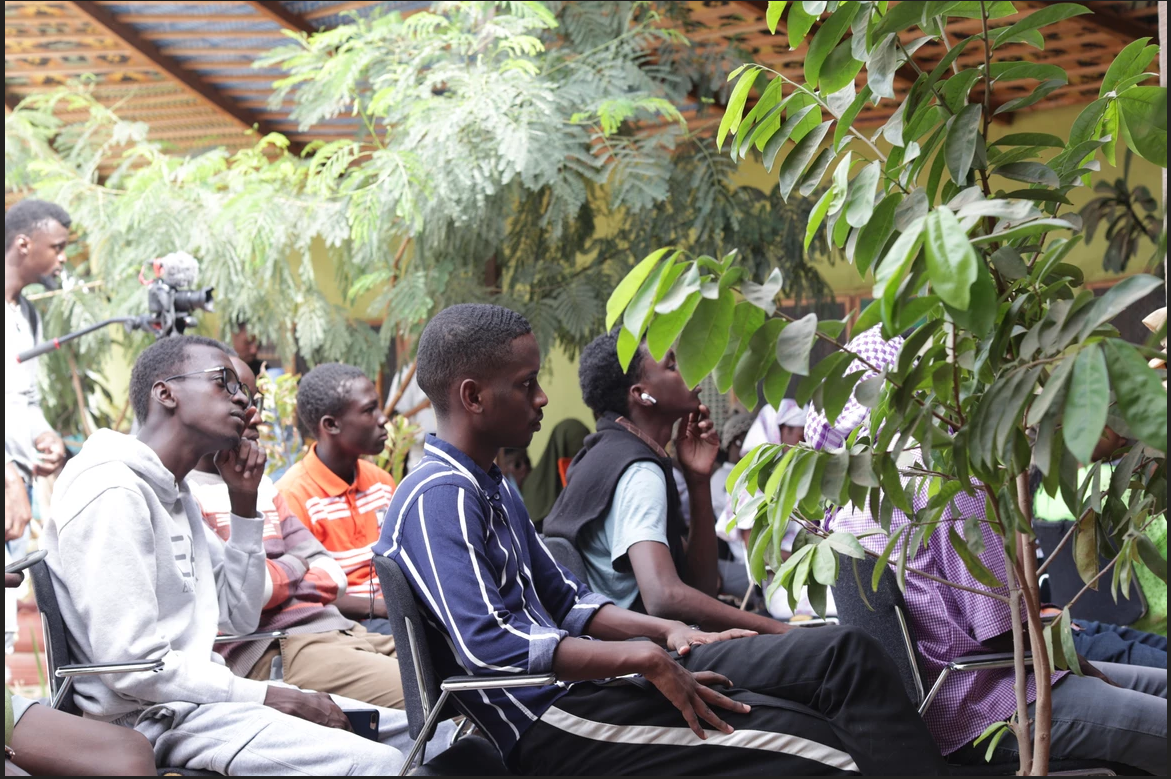 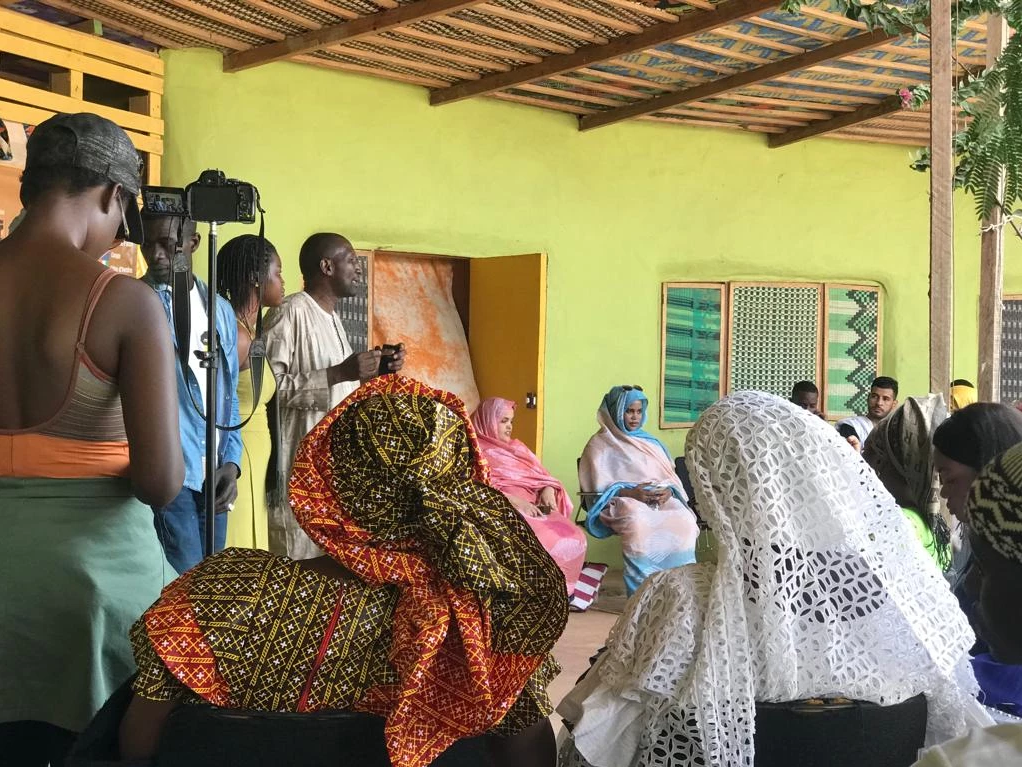 Overall, the food festival’s short-term goal - to stimulate and consolidate a permanent space for exchange - has been a success. Beyond the event itself, GAEC-AFRICA also created a blog with some resources from the festival such as extracts from the talks mentioned above. The blog also serves as a space to further discuss the challenges brought up during these three days.

In the medium and long term, the festival committee plans to work towards encouraging the development of domestic and community vegetable gardens, creating a monthly, then bi-monthly and finally weekly earth market and making the City of Saint-Louis a model experience that can be reproduced at national, regional, and international levels.

The content for this article was taken mainly from the blog on the Food Festival created by the GAEC-Africa collective (accessible at https://gaec2020.wixsite.com/blogstreetfood) in French.