Pu Lamkhothang: The hill patriot of Japan-Gal is written by Michael Lunminthang on his late great grand uncle for the session on Day 2: Reading/Writing/Re-writing/Telling/Re-telling using prompts, 20 December 2019.

A few days ago, when I was reading through the diary of my late grand uncle, I came across a line, which ignited my curiosity.

“I am not an ordinary man, I was a Captain for the independence of India”. 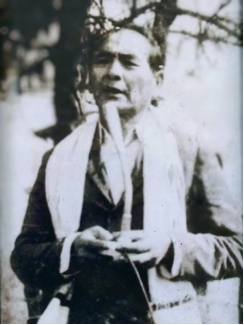 In fact, I saw the line repeated again on other pages of his old tatty ragged diary, where he wrote some of his reflections and drafted his official communications.

I reflected on the line and many questions emerged- what motivated him to write that particular phrase? Was it his dominating spirit? Were those his self-motivating silent words? Was he echoing the voices of those on the fringe? There are many more questions that can be pondered upon but sadly there are no answers for all of them.

Pu[1] Lamkhothang loved the word “patriot” to describe himself. He confessed he had the zeal to liberate his people from the bondage since his childhood. Born and brought up in a small village of Wayang, situated in the wilderness of Dingpi ridge, surrounded by Amazon-like forest where the nearest town is three-four days walk on foot, he was determine to do something good for his country. To commit to his patriotic yearning, he joined the Assam Regiment in 1939. Everything was peaceful and he also got married and settled down; and like any normal Indian jawan, left his wife and kids at home to serve the nation wherever duty called.

However, the idyllic life of the new jawan was short lived as the world plunged into another war. The British, who controlled India at that time, joined the World War II and India became a base for the Allied powers. But India was safe from destructions and bombings. Unexpectedly, the fringe areas bordering Burma felt the maximum casualty of the war. The damage and bombings were so severe, many historians termed it as “Stalingrad of the East” when measuring the destruction caused by the war. The battles of Kohima and Imphal were later voted as the “Britain’s Greatest Battle” during World War II.

The years 1942-43 were challenging times for people living in the trans-border regions of India and Burma. The Japanese-INA (Indian National Army), after annexing Burma planned their “Forward Policy” and started recruiting the ethnic communities in their intelligence networks of Hikari Kikan (Rising Sun Organisation) and Nishi Kikan (Western Organisation). Along with the enrolment, Netaji Subhash Chandra Bose made strong appeals to the people to support the Japanese and INA. Simultaneously, the British in India did not remain silent to the developments. They also recruited the same communities in their guerrilla insurgent organisation known as V – force. It was a difficult time for the people of the region, when two great campaigns, knocked on every door for their selfish motives.

It was at this juncture Pu Nohhao, the Chief of Wayang village, and father of Pu Lamkhothang was tortured and arrested for attending a meeting at Chahmol village that was summoned by the Japanese Army. This episode infuriated the young jawan of the Assam Regiment. He could not believe how, the same country for which he took solemn oath of allegiance, could not protect his own family. He was full of questions and was a disturbed man in the barracks of 4th Battalion.

This incident became a turning point in his life. He took a short leave/holiday from his regiment and rushed to his village. He was able to see the developments and preparations for the war more closely. His inner zeal to liberate his country became intensified. His childhood dream of patriotism was renewed. He was determined not to return.

He went down to Burma, met the Japanese army and the INA. Believing in the promises of Bose, he was determined to re-kindle his childhood dream “to free his country and his people”. He changed his allegiance and joined the INA. The Japanese-INA welcomed him wholeheartedly and appointed him as Captain. Later on, he was promoted as Civil Organiser and Facilitator. With his contribution, he was able to convince members of his community and his neighboring tribes to support the INA. At the peak of the war, he was asked to join the combat force. He led many battles of the Japanese-INA and was lucky enough to survive the war. For his very act of patriotism, he was captured, tortured, jailed and released after the war ended.

For the patriots of the hills, it is worth remembering the words of K.R. Palta, the personal Intelligence Officer of Netaji Subhas Chandra Bose, in his book My Adventures with the INA[2], where he acknowledged the contributions. He wrote, “the local population on the borders of India on the whole, wholeheartedly welcome and helped the INA. The Kuki people had at the risk of their lives assisted INA wholeheartedly. The INA had nothing to pay back for such support, except Thank You and Jai Hind!”.

My memories take me back to my village Wayang in early 1980’s where we, as kids, ran after him, barefoot in shorts asking stories of his ordeal during the war… again and again. To accommodate the childhood curiosities, he would sing songs that they sang during his days in the army. Sometimes he told us the jokes he remembered, but every time he would have a different and interesting story to share. Festivals and celebrations were lively and merry because he would always have something special for the occasion. But then he passed away in the hands of few villagers, whom he loved so dearly while we, the kids who ran besides him for stories, left the village for our schooling. Many years have passed by with many political changes since then. The Japanese who lost the war, deleted the whole episode from their children’s curricula, the narratives of INA are forgotten by the nation, and the life of Netaji Subhash Chandra Bose is still a mystery. The serene village was deserted due to insurgency and landmines. But the war and heroes of Japan gal (local name for WW II) live through songs and stories of people who remember them.

Michael Lunminthang is an Assistant Professor at Ambedkar University Delhi. The ideas and words are the author’s alone. He can be contacted at mikehaokip@gmail.com

The word Pu is a salutation for an elderly person of social eminence or grandparents.

Day 2 of the Storytelling & Writing Workshop, Chennai
The story of Bodo stole and Kannagi protests
The Blue Belt
Disappearing Aura
Different? Not really
Cycling Shades of Chennai
Jaadoonagri (Wonderland)
The Emerald Green Scarf
Imaginations of a Street
Who Am I?
Getting Ready for School?