The team from Chiang Mai University led by Malee Sitthikriengkrai and Siya Uthai are investigating the livelihood practices of the Karen ethnic group in Huay Hin Lad Nai village of Chiang Rai province in Northern Thailand.

In the following diary entry, one of their research assistants, Oraya, goes to stay at the village and live with the community members to learn about their lives. This is her diary entry. 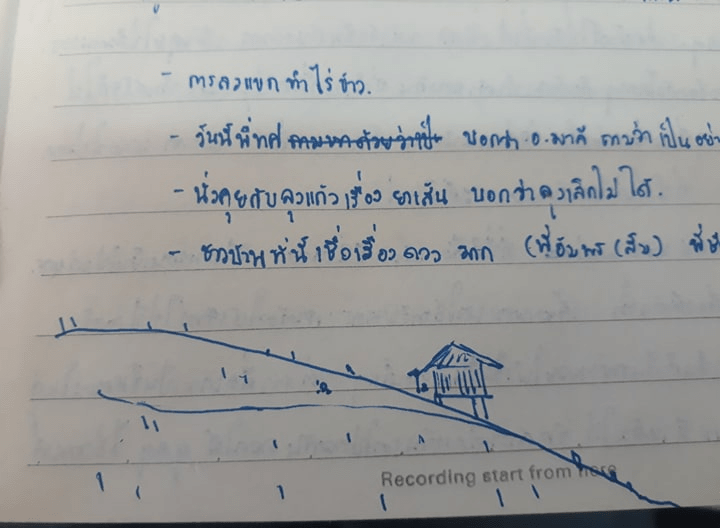 May 31, 2017 At 5.26 am, I heard cooking sounds from the kitchen that woke me up before my clock alarm could wake me. This was my first day at Huay Hin Lad Nai Village, so I should hurry up and finish my daily morning activities. After that, I met Tot, a member of local sub-district administration, who brought me to Nhan’s house. Nhan is the first son of Hee-Kho (the community’s spiritual leader) and he informed me about the religious ritual at the village in the next day that non-village members are not allowed to attend. In this ritual, only men who were born at Huay Hin Lad Nai are able to join. Then, Tot and Nhan took me to Amporn’s house instead. While Amporn talked with us, she fed her son, ‘Guide’ who is only 1 year and 4 month. There was Amporn, her son, younger brother of Amporn, older sister of Amporn who is still single, Amporn’s father and Amporn’s mother in the house. All of them invited me for breakfast, which was my first meal at the village. The meal comprised of fried-pork fillet and pork soup.

During breakfast, we also talked about today’s activities and I’ve learnt that villagers would go to work on rice fields. So I asked for permission to follow them. We departed at 8.10 am, the route to the field was steep down from the hill and there are creeks and brooks along the way. We had to walk up hills before arriving at the rice field which was already chopped and burnt for cultivation. At that time, about 20 villagers from Huay Hin Lad Nai and Huay Hin Lad Nok came earlier to work together for rice ceremony before the beginning of annual cultivation. A man dug out holes in the soil with bamboo shovel, while one or two women dropped rice and other seeds into the holes -  about 7 seeds each.

The villagers walked from the bottom to the top of the hill and I followed them the whole time which made my feet getting hurt as I was wearing unsuitable shoes. I got to know many villagers at the rice field such as Wilai from Hin Lad Nok, Lek who helped to manage my stuff, Uncle Si who spread out soil during digging. I tried to dig the soil but it was difficult while it seemdc easy for them. At noon, the rice field occupants gave us their food but all of them prepared their own rice, carrying them in banana leaves mostly with only a few plastic bags. My lunch menu today were fried-bamboo shoot and pork soup. Luckily, it was not too hot because of rain that morning. Uncle Kaew asked me about my family background, while I collected mushroom for food. I felt happy there because I was surrounded with friendly people in this village.

When the work was almost done, Mother Lha, a younger sister of Pati Preecha asked me to collect local ferns, the vegetables to go with fried eggs. I walked with her to collect them near a little brook before getting back to the village. On the way back, I had to walk up hills that made me exhausted. I arrived at my accommodation at 13.00 pm, then, I washed my clothes and myself before taking a long nap about 1 hour because I felt really tired. I slept until I heard the voices of children. I got up and looked out of the window. School was over and it was raining again. When children saw me, they said greetings and ran away laughing. I waited out the rain for a while before going to see a few foreign students who were there a month ago and would leave on the next day. At the evening, I had a dinner at Amporn’s house and I ate a lot as the meal comprised of fried egg, eggplant-chili paste, mushroom soup, mushroom spicy salad. I was enjoying this meal but they are prepare some food specially for me. I intended to adapt my tongue to eat their way!

Living in and with the Forest in Northern Thailand